Here's more coverage of our rally for free speech in Texas. 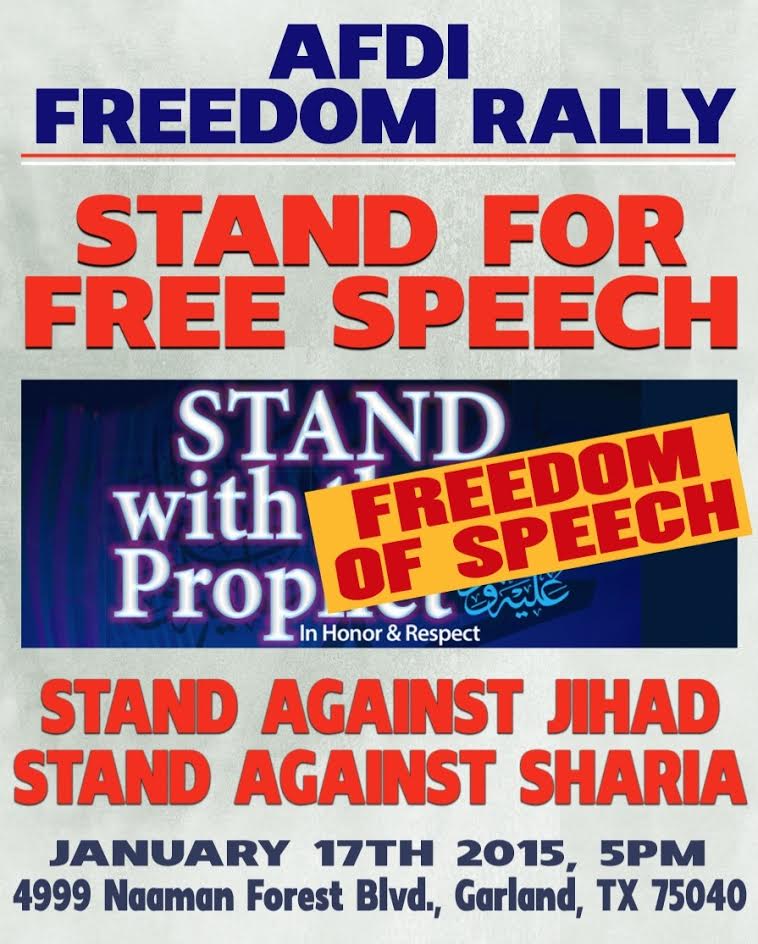 In response to public outcry, local grassroots groups will join forces to stand for free speech and peacefully protest the Islamic fundraiser, Stand with the Prophet in Honor and Respect on Saturday, January 17, outside of the Curtis Culwell Center in the Dallas suburb of Garland, starting at 5pm (CT). The effort will be headed up by nationally recognized human rights activist Pamela Geller.

Breitbart Texas reported that the event center housing the Islamic fundraiser is located on Garland Independent School District (ISD) property and, in 2002, the $30-plus million multi-purpose center was funded by the property taxpayers primarily through revenue bonds. Eyebrows have more than raised by the fact that a taxpayer funded facility was rented out by school district officials to hold a vitriolic event that features New York City Imam Siraj Wahhaj.

The Counterterrorism Blog called Wahhaj the “unindicted co-conspirator in the 1993 World Trade Center bombing” who has reportedly called for replacing the US government with an Islamic caliphate.

In response, the grassroots from across Texas and the nation have solidified to exercise their First Amendment rights. Geller’s group, the American Freedom Defense Initiative (AFDI) is leading the charge.  AFDI President Geller will be in Garland at the Curtis Culwell Center. On her longstanding Atlas Shrugs blog she posted, “Meet me in Texas.” AFDI will kick off their free speech rally at 5pm (CT).

Our AFDI rally,” Geller wrote for Breitbart News, “will stand for the freedom of speech against all attempts, violent and stealthy, to impose Islamic blasphemy laws on Americans and stifle criticism of Muhammad and Islam. As Muhammad’s followers kill more and more people, we need critics of him more than ever – and free people need to stand up against these underhanded attempts to stifle all criticism of Islam, including honest investigations of how jihadists use Islamic texts and teachings to justify Jew-hatred, violence, supremacism and oppression.”

Geller told Breitbart Texas in a statement, “In the wake of the jihad slaughter in Paris, an Islamic conference in America should stand for freedom of speech not the savage legal system (Sharia) that calls for the death penalty in order to ‘avenge the prophet’. We must stand against this hate and movement to crush free speech.”

She emphasized that the objective of these “islamophobia” conferences are “ultimately to shut down free speech.”

Geller also told Breitbart Texas,  “Islamophobia” is a cultural device designed to crush any criticism of Islam (in accordance with Islamic law). It was invented, deliberately, by a Muslim Brotherhood front organization, the International Institute for Islamic Thought, which is based in Northern Virginia.”

Dallas-based Ken Emanuelson, who is affiliated with the Grassroots Texans Network, is helping to spread the word about AFDI’s rally. He told Breitbart Texas that their demonstration is to show support for freedom of speech being threatened by Islamic activists.

“Whether one agrees with a particular message or opposes it, we should all be able to come together around the idea that every human being has a right to speak his or her mind,” Emanuelson said.

Overpasses for America – Texas is another group whose statewide members are attending.  They will begin to assemble at 3pm (CT). They highlighted on their Facebook event page, “The Garland Police Department (PD) is bringing in additional officers for this event so please drop by and thank them for providing protection at this event. Our law enforcement officers have been going through their own rough time so let’s let them know how much they are appreciated.”

Non-sponsoring grassroots groups like the Garland Tea Party are a few among the many expected to attend the peaceful demonstrations.