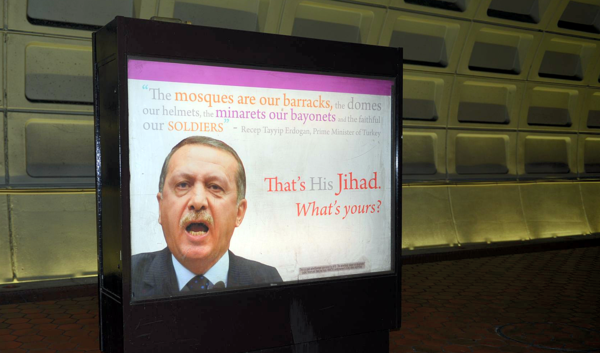 The AFDI ads feature actual quotes from Osama bin Laden, Turkish Prime Minister Recep Tayyip Erdogan, a witness to the jihad of Fort Hood mass murderer Maj. Nidal Malik Hasan, Hamas
TV and Times Square jihad car bomber Faisal Shahzad. They depict Osama
bin Laden's actual explanation of why he took down the Twin Towers: "The
first thing we are calling you to is Islam." They note that Hasan was
shouting "Allahu akbar" as he murdered 13 Americans at Fort Hood. They
recount a Hamas TV music video that included the lyric, "Killing Jews is
worship that draws us close to Allah," and report Shahzad's words on
how jihad involving "weaponry" is "an obligation and duty in Islam on
every Muslim."

"Americans need to understand the threat they're facing," said AFDI Executive Director Pamela Geller.
"That is the point of our ads. The slaughter of Christians in Nigeria,
Bangladesh, Ethiopia, Malaysia, Algeria et al — that doesn't warrant a
statement, let alone a press conference from San Francisco authorities,
but my ads do. Think about that. Hundreds of thousands dead, but it
would be blasphemy to talk about. The slaughter in the cause of jihad is
OK, but my talking about it is the problem."

Geller continued: "It is significant that they did not condemn the cynical and deceptive Hamas-linked CAIR
ads that ran on buses earlier, and to which my ads are replying. Their
inconsistency and politically motivated selective outrage are manifest."

"Hamas-CAIR," she said, "an unindicted co-conspirator in the largest
Hamas funding trial in our nation's history, has created out of whole
cloth a propaganda campaign that dissembles, deceives, and deliberately
lies about the definition of jihad. Our ads reply to that campaign with
the truth about the jihad threat in the words of the jihadis
themselves."

CAIR is indeed an unindicted co-conspirator in a Hamas terror funding case — so named by the Justice Department. CAIR operatives have repeatedly refused
to
denounce Hamas and Hizballah as terrorist groups. Several former CAIR officials have been convicted of various crimes related to jihad terror. CAIR's cofounder and longtime Board chairman (Omar Ahmad), as well as its chief spokesman (Ibrahim Hooper), have made Islamic supremacist statements. Its California chapter distributed posters telling Muslims not to talk to the FBI.

Hamas-linked CAIR's attempt to defame AFDI and dictate to New Yorkers
what messages they can and cannot see is consistent with its long
record of pro-jihad duplicity, deception and thuggery. One member of
this unsavory gang has even previously called for these ads to be defaced.
Although it has received millions of dollars in donations from foreign
Islamic entities, it has not registered as a foreign agent as required
by the Foreign Agents Registration Act (FARA), despite spreading Islamic
supremacist propaganda within the United States.

Although it presents itself as a civil rights group, CAIR actually
has numerous links to hateful and violent Islamic supremacist and jihad
groups.

CAIR founders Omar Ahmad and Niwad Awad (who still serves as CAIR's
executive director) were present at a Hamas planning meeting in
Philadelphia in 1993 where they and other Hamas operatives conspired to
raise funds for Hamas and to promote jihad in the Middle East. CAIR has
steadfastly refused to denounce Hamas and Hizballah as terrorist groups.

In 1998 Omar Ahmad, CAIR's co-founder and longtime Board Chairman,
said: "Islam isn't in America to be equal to any other faith, but to
become dominant. The Koran should be the highest authority in America,
and Islam the only accepted religion on Earth."

After he received unwelcome publicity as a result of this statement,
Ahmad denied saying it, several years after the fact. However, the
original reporter, Lisa Gardiner of the Fremont Argus, stands by her
story.

CAIR's spokesman Ibrahim Hooper once said: "I wouldn't want to create
the impression that I wouldn't like the government of the United States
to be Islamic sometime in the future."