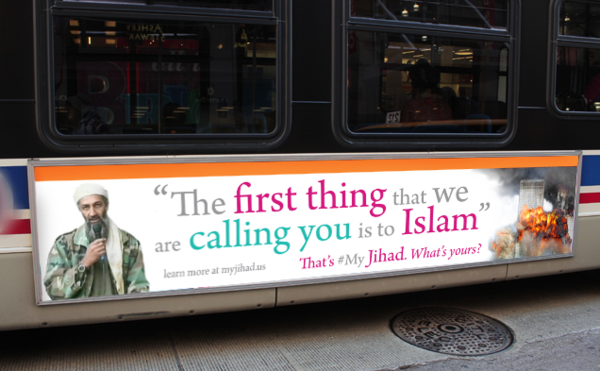 Actually CAIR’s whole campaign is a complete fraud. Don’t take my word for it. Listen to what devout Muslim groups are saying about this ruse:

#MyJihad campaign
ain’t jihad, says Hizb ut Tahrir: “If this is Jihad – what Jihad were
the Muslims doing under Rasul’Allah [Muhammad]” (thanks to Jihadwatch)

Hizb ut Tahrir is an organization of Islamic supremacists around the
world, dedicated to imposing Sharia. Apparently they didn’t get the memo
about how the witless unbelievers need to be deceived about the nature
and meaning of jihad, and so they’re taking issue with Ahmed Rehab and his cosmetics. Blazing Cat Fur has the link to the HuT forum:
There seems to be a new push by western Muslims, pushed to
counter “extremists” and those that may have been contaminated by
“moderate Islam” to reclaim “Jihad”. They will be using tools such as
social media -“facebook/twitter” – how influential are they in the
battle of ideas for the west. Other methods will include advertisements
and posters/billboards….

The notorious Islamic shill Manya Brachear over at the Chicago Tribune reports on the story. She slobbers and drools like a Saint Bernard. She enthusiastically prints every Rehab lie without ever mentioning Hamas-CAIR’s unindicted co-conspirator status in the largest terrorist funding trial in our nation’s history, the arrest and convictions of their leadership on terror related charges, or their Muslim Brotherhood designation. Good doggie.

I am freedom; it’s why CAIR so despises me. And I call them out on endless stream of lies. And more lies.

A screengrab of the MyJihad website touting its new ads on CTA buses.
(http://myjihad.org/ / December 17, 2012)

This past weekend, the Council on American-Islamic Relations launched
“MyJihad,” a national ad campaign featuring individuals’ testimonies
about what the pillar of Islam means to them.

But on Monday, the American Freedom Defense Initiative, or AFDI,
asked the CTA to accept another batch of ads, featuring mock testimonies
from high-profile Muslim extremists, including Osama bin Laden.

The campaign is the second
one launched by the initiative, which rolled out a controversial series
of bus posters last month urging passengers to “Defeat jihad.”

“The MyJihad campaign is about reclaiming jihad from the Muslim and
anti-Muslim extremists who ironically, but not surprisingly, see eye to
eye on jihad,” said Ahmed Rehab, executive director of the Chicago
chapter of the Council on American-Islamic Relations, also known as
CAIR. Rehab also created the slogan.

The people behind the AFDI initiative have become the “premiere promoters of extremism and violence,” he said.

Pamela Geller, executive director of AFDI, said the fact that some
Muslims consider jihad a peaceful concept does not cancel out the fact
that there are others who interpret it violently.

“This usage of jihad is much more influential and widespread among
Muslims worldwide than the benign and whitewashed understanding of it”
presented in the ad campaign, Geller said.

Rehab said Geller’s attempt to hijack the “MyJihad” slogan amounts to
fraud. He said CAIR’s campaign includes ads on buses and trains, as
well as a social media component on Twitter, where users are asked to
tweet their testimony with the #MyJihad hashtag.

He added that the campaign has evolved into an interfaith effort,
including Muslim mothers who are concerned that their children will be
bullied, as well as Jews and Christians.

“We have been overwhelmed with the participation of people of other
faiths tweeting their struggles,” campaign volunteer and Naperville mom
Angie Emara said in a statement. “People of different backgrounds are
finding a common language. They’re learning to see themselves in one
another as they share similar expressions of their daily jihad.”

Yes, Americans and other freedom loving peoples have been overwhelmed by ….jihad.