CPAC issued “talking points” on how to deal with the fallout from the cancellation and subsequent hijacking of my CPAC panel on free speech:

Email reveals CPAC talking points on its most controversial speakers

According to an email obtained by the Washington Examiner, ACU Finance Director Ryan McGowan sent an email just before 6 p.m. Wednesday evening that read, “ACU Comms wanted to share with you the following talking points if you are approached by the media.”

The body of the email, pasted below, addressed speakers French politician Marion Marechal-Le Pen and former Wisconsin Sheriff David Clarke, as well as sponsoring organization the American Principles Project, each of which has drawn criticism from conservatives, and liberals, rankled by CPAC’s decision to give them a platform.
Trump outlines gun agenda: Background checks, bump stock ban, raise the age limit…

The full talking points are included below:

CPAC sponsor APP is hosting a panel discussion on conservative voices being silenced on the internet. APP invited Pamela Geller to participate on the panel. She initially accepted but she then made her participation contingent on APP including another person who was obviously a poor choice. Pamela is actively promoting a version of events that are intentionally inaccurate designed to mislead and mischaracterize the construction of this presentation. She is no longer a participant, her claims that the panel is cancelled are false and the panel will move forward as intended.

Here is the panel proposal I sent: 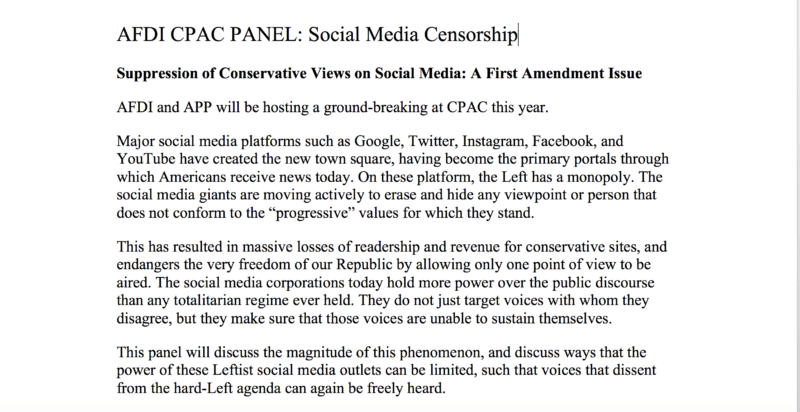 Note that the panelists I proposed include all of those who are speaking at what is now being presented as an APP event at which I was invited to speak. The title of that panel is “Suppression of Conservative Views on Social Media: A First Amendment Issue.” That’s exactly the same title of the panel proposal I sent to Schneider and Schlapp on February 14.

I advised Matt Schlapp months ago that I was willing to pay the full price for ta CPAC sponsorship in order to get the room. CPAC didn’t allow that, but months later they did come up with an alternative plan – and then put numerous obstacles in our way, finally pulling the plug altogether.

The deal they ultimately offered me came with a number of strings attached. One of their ACU sponsors, the American Principles Project (APP), had a room they weren’t using and would let us use it. But even then, this would not have been an event sponsored by AFDI. CPAC wouldn’t allow that. Instead, they said that my event had to be sponsored by the APP, a group I had never heard of. 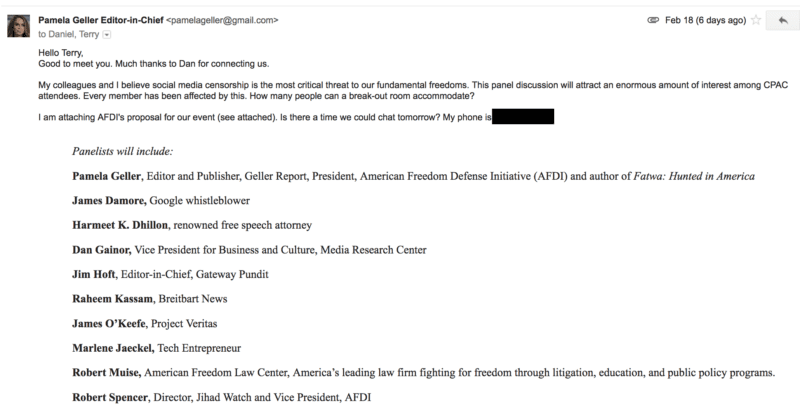 I have many, many more emails and of course, the phone conversations. It was as AFDI panel.

I had to cut the panel down to almost half. So I looked for duplication. David Yerushalmi and Robert Muise (AFLC, my legal team on at least ten cases) were redundant to Harmeet Dhillon (I thought a fresh face on my panel would be an interesting change). And Robert Spencer and Raheem Kassam’s stories were much like mine. Redundancies there as well.

I wanted at first to feature some fresh faces who had not spoken at our earlier free speech events – to broaden the circle. But I am confident that if Spencer, Muise and Yerushalmi had remained on the panel, they would not have consented to its theft by CPAC.

Money quote from my first conversation with Schilling from Monday after our e-intro. Actual quotes:

I asked, “Are you going to be there?”

Schilling: “I could be there and do the intro or something. I don’t have the expertise, I couldn’t do the panel.” 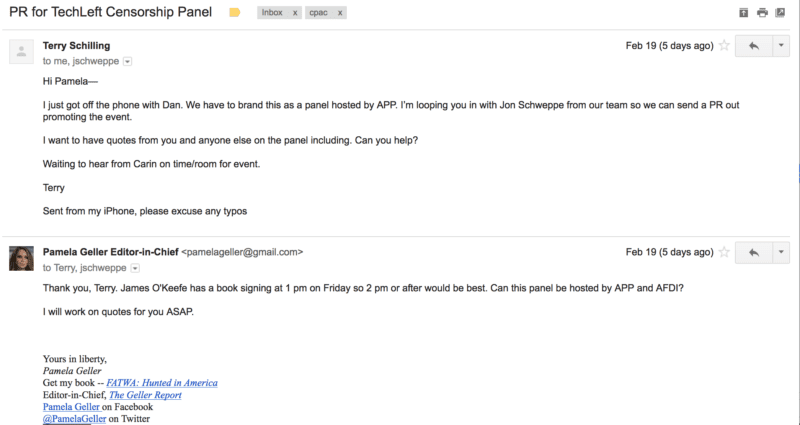 This is the height of irony (as well as theft): a panel on free speech from which not one, but two speakers have been banned. How can they claim to stand for free speech after dropping a speaker because of pressure from the authoritarian left? What value can a free speech panel have when two free speech leaders were banned from that panel?