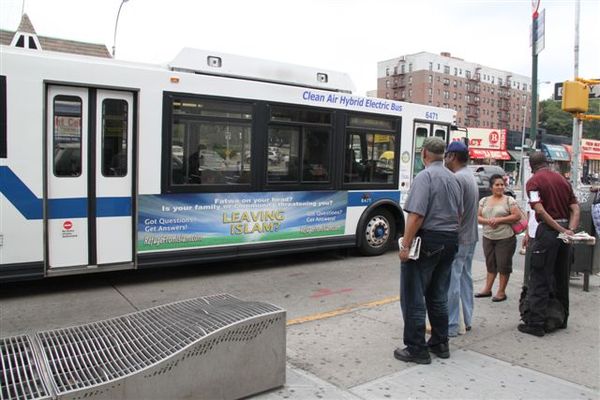 Freedom buses will run in Detroit!

We won in our free speech lawsuit against Detroit. Huge props to our stealth legal team David Yerushalmi and Robert Muise.

This is a huge win, not just for us, but for the First Amendment. Geller Vs. Detroit

While there are technical aspects of First Amendment law in the opinion that my lawyers question, the result was correct and the judge recognized, as highlighted in the court’s opinion, that SMART hung itself during cross examination. This is a huge win, not just for AFDI but for the First Amendment, and a defeat for all those who claim that I am a hater because I am willing to talk about what is wrong in Islam, including, as in this case, honor killings and fatwas for apostasy.

Perhaps the oppositon will better understand the nature of my work. This is a direct refutation to all those who claim I am a hater or that my lawyers are "haters" for representing me. I love not hate and I fight for love, art, music and freedom!

And, huge kudos to Judge Denise Hood, who protected free speech and did not take any swipes at my message, which she could have (like saying, “while we might despise AFDI’s message, we must protect it…”). She did not do that. Good for her.  It took awhile, but the wheels of justice ……..

I am thrilled, not just for the protection of free speech, but for those living in danger who will be helped by our freedom buses.

Special mention and whttp://iowntheworld.com/blog/?author=11arm thanks to Big Fur Hat who executes my art, ads etc with his particular brilliance

Defendants argue that their policy is viewpoint neutral. However, there is nothing in the policy that can guide a government official to distinguish between permissible and impermissible advertisements in a non-arbitrary fashion. Defendant Beth Gibbons testified that there were no other written guidelines or manuals available, aside from the guidelines found in the contract between SMART and CBS. She further testified that, while the atheist advertisement was purely religious, rather than political, there was no manual or language that set forth what distinguished a political advertisement from a religious advertisement. Under Sixth Circuit law, “[t]he absence of clear standards guiding the discretion of the public official vested with the authority to enforce the enactment invites abuse by enabling the official to administer the policy on the basis of impermissible factors.” United Food & Commercial Workers Union, Local 1099, et al. v. Southwest Ohio Reg’l. Transit Auth., 163 F.3d 341, 359). “[T]he limits the [government] claims are implicit in its law [must] be made explicit by textual incorporation, binding judicial or administrative construction, or well-established practice.” Id. (internal citations omitted).