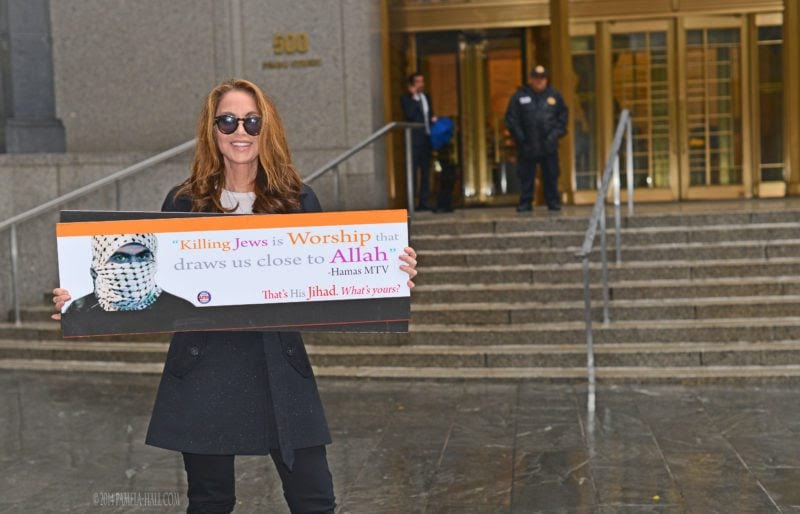 While our Philly free speech win is still reverberating across the country,  the American Freedom Defense Initiative (AFDI) won an important victory for the freedom of speech today as a federal court ruled that New York City’s Metropolitan Transportation Authority (MTA) must run its ad criticizing Hamas and Islamic anti-Semitism on City buses.

The media coverage is massive – New York Times, NY Daily News, ABC, NBC, NY Post, Jerusalem Post, The Daily Mail et al (scroll down). All of these news stories quote the ad — so the message, one that few know, gets to millions more people.

The ad reads, “‘Killing Jews is worship that draws us closer to Allah’ – Hamas MTV. That’s his jihad, what’s yours?” It was developed as a rejoinder to the deceptive and misleading ad campaign of the Hamas-linked Council on American-Islamic Relations (CAIR) that attempted to deceive Americans into thinking that jihad involved nothing less innocuous than going to the gym and taking children to school, not waging war against non-Muslims.

AFDI President Pamela Geller said in a statement: “This is another huge AFDI victory for freedom and individual rights. Judge John Koeltl came down on our side on every point, upholding the Constitution and beating back sharia restrictions on free speech.”

The U.S. District Court for the Southern District of New York ruled in AFDI’s favor on its motion for a preliminary injunction asking the court to order the MTA to run the ad. The MTA had claimed that the ad could incite violence, as a jihadi might think that the ad was giving him orders. Koeltl rejected this argument in his ruling as he wrote:

The defendants’ theory is thoroughly unpersuasive.

Koeltl emphasized the most important point: “[S]ecuring First Amendment rights is in the public interest.”

For further information about the hearings, see here.

Watch this video which aired on NBC this past Sunday on our Phillly win:

With our NY win, our ads will make their debut on New York buses in the coming weeks.

Or mail your contribution to:
AFDI

The terror-linked group CAIR had an ad campaign ‘rebranding’ the word jihad (http://myjihad.org/). They mean to make it into something soft and fuzzy. Our ad campaign is a response to their campaign.

The “killing Jews is worship to Allah” ad is a direct quote from a Hamas broadcast on “Palestinian” television. Hamas was just re-elected. Do Americans know this? It is about calling attention to the genocidal statements of Hamas, and to Islamic antisemitism in general. It is scandalous that even one penny of American aid goes to these people who nurse this genocidal bloodlust.

Donate to our work here.