We prevailed in our free speech lawsuit against the city of Seattle. Today the United States Court of Appeals for the Ninth Circuit ruled in our favor. Seattle had rejected AFDI’s public service ad because of a perceived disparagement to Islam. We sued against sharia in Seattle. King County unconstitutionally refused to display AFDI’s ads concerning global terrorism on the exterior of its public buses.

We sued. It took five years but today we prevailed. The Geller Ban has been lifted. Please help us get these ads up. DONATE HERE.

“Tolerate harm to the transit system” — everyone, it seems, it terrified of Muslim violence.

We are deeply grateful to our legal team, Robert Muise and David Yerushalmi of the American Freedom Law Center (AFLC).

This all started back in 2013, when the FBI was running a terrorism awareness campaign featuring bus ads depicting photos of sixteen of the world’s Most Wanted Terrorists.

This was a publicity campaign sponsored by the Joint Terrorism Task Force for the State Department’s Rewards for Justice (RFJ) program. The ad featured the world’s leading global terrorists. As it happened, all but one were Muslim. Islamic supremacists and their leftist lapdogs demanded the want ad come down, claiming it was insulting to Muslims. The FBI caved and pulled the Seattle-area bus ads featuring the “Faces of Global Terrorism” after receiving complaints “that the ads stereotype Muslims.”

My organization, the American Freedom Defense Initiative (AFDI), believed that this public awareness message was critical to national security and should run. We are constantly being clubbed with the claim that “moderate Muslims” abhor and reject the acts of terrorism that are constantly committed in the name of their religion, so why would they object to a wanted poster featuring Islamic terrorists who supposedly have twisted and hijacked their peaceful religion? Why would “moderate Muslims” provide cover for jihad terror? Why, indeed. 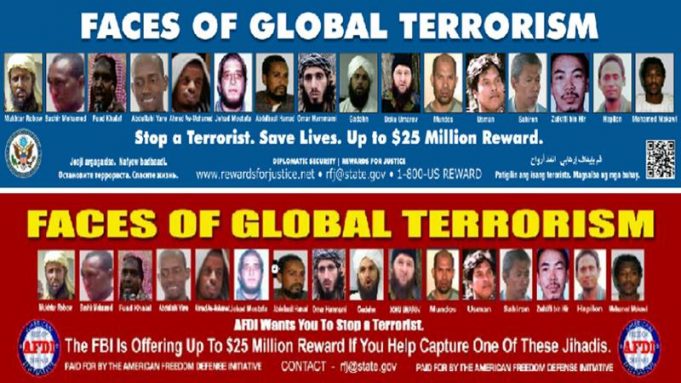 We sued Seattle King Metro. Predictably, the liberal fascists in Seattle sided with the supremacists. We appealed to the clowns on the notorious 9th U.S. Circuit Court of Appeals. And now they, as expected, ruled in favor of sharia and supremacism.

Of all the free speech legal battles I am embroiled in, this one is the most absurd. It illustrates the crippling submission and capitulation of government authorities to Islamic supremacist demands. And now it has gotten even more absurd: King County claimed last year that “AFDI…has directly forced six of the ten largest transit agencies in the United States to end all forms of political, public interest, and religious advertising. AFDI’s Pamela Geller calls this the ‘Geller Ban.’ Dkt. 57 (Declaration of Hackett, Ex. D (Geller Dep. at 44:19 – 45:1-4)). To date, not counting the transit systems chilled by AFDI’s ‘free speech’ campaign, the ‘Geller Ban’ has substantially limited the speech available to over 50 million Americans who live in the affected service areas.”

That’s right: they’re blaming us for the fascist, counter-free speech actions of the transit systems that changed their rules to ban all political ads rather than run our ads. This is like blaming a woman for being raped.

Our legal team at the American Freedom Law Center has responded:

The so-called “Geller Ban” referred to by the County is nothing more than a concerted effort by government officials to discriminate against Plaintiffs by seeking to close forums for Plaintiffs’ speech because the officials dislike the message. Plaintiffs refuse to surrender their freedoms to these government censors.

This is a key freedom of speech case, with enormous implications far beyond this one ad. We will never give up in our fight against this flagrant attempt to suppress our most fundamental freedom.

UPDATE from my legal team AFLC:

Today, a three-judge panel of the U.S. Court of Appeals for the Ninth Circuit unanimously ruled that King County’s rejection of a “Faces of Global Terrorism” ad submitted by Pamela Geller, Robert Spencer, and their organization, the American Freedom Defense Initiative (AFDI), violated the First Amendment.

The lawsuit was filed by the American Freedom Law Center (AFLC) in the United States District Court for the Western District of Washington at Seattle on behalf of Geller, Spencer, and AFDI.

The ad at issue was modeled after an advertisement submitted by the federal government and accepted for display by the County in 2013. The State Department ad depicted the “Faces of Global Terrorism” in an effort to “stop a terrorist” and “save lives.” The advertisement offered an “up to $25 million reward” for helping to capture one of the FBI’s most wanted terrorists.

The terrorists identified in the ad were also found on the FBI’s most wanted global terrorists list, which is posted on the FBI’s website. At the time, this list included pictures and “wanted posters” for thirty-two terrorists. Of the thirty-two listed terrorists, thirty were individuals with Muslim names or were wanted for terrorism related to organizations conducting terrorist acts in the name of Islam.

According to news reports, the federal government terminated its “Faces of Global Terrorism” ad campaign after receiving complaints from politicians and advocacy groups that took offense that the list of wanted global terrorists pictured in the ad appeared to include only Muslim terrorists.

Shortly after the government pulled the ad, Geller and Spencer, on behalf of AFDI, submitted an ad to the County that included the same pictures, names, and message as the government’s earlier display. The County transit authority refused to run the ad in part because it claimed the ad was not wholly accurate about which government agency ran the rewards program and the amount of the awards, prompting AFLC to file this lawsuit.

After the courts agreed with the County, AFDI submitted a revised ad, this time making certain the ad was presented in such a way that removed the inaccuracy argument. The County still refused to run the ad on the grounds that it was disparaging to Muslims and that it would be disruptive to the transit authority.

The trial court once again ruled in favor of the County. AFLC appealed to the Ninth Circuit, and the Ninth Circuit reversed, concluding that “[b]ecause neither of the [County’s] reasons for rejecting Plaintiffs’ revised ad withstands First Amendment scrutiny, we reverse the district court’s grant of summary judgment to the County and remand with instructions to enter summary judgment for Plaintiffs on this claim.”

“This is an important victory for free speech. Too often we are seeing government officials restricting speech based on claims that it is demeaning, disparaging, or offensive. The First Amendment does not allow such censorship, as the Ninth Circuit’s opinion makes clear. Under the First Amendment, the government is not permitted to impose special prohibitions on speakers who express views on disfavored subjects or on the basis of hostility towards the messenger or the underlying message expressed.”

“It is clear from the record and the Ninth Circuit’s decision that King County, which initially accepted the federal government’s ad only to have the feds pull the ad for fear of offending Muslims, is suffering from the debilitating disease of political correctness. And there is little doubt that County officials also dislike the messenger—our clients—who are doing a great service by alerting all Americans to the dangers of sharia and its followers.”