To register for the Jessica Mokdad Human Rights Conference, please email AmericanFreedomDefense@aol.com with your name, email address and number of people. 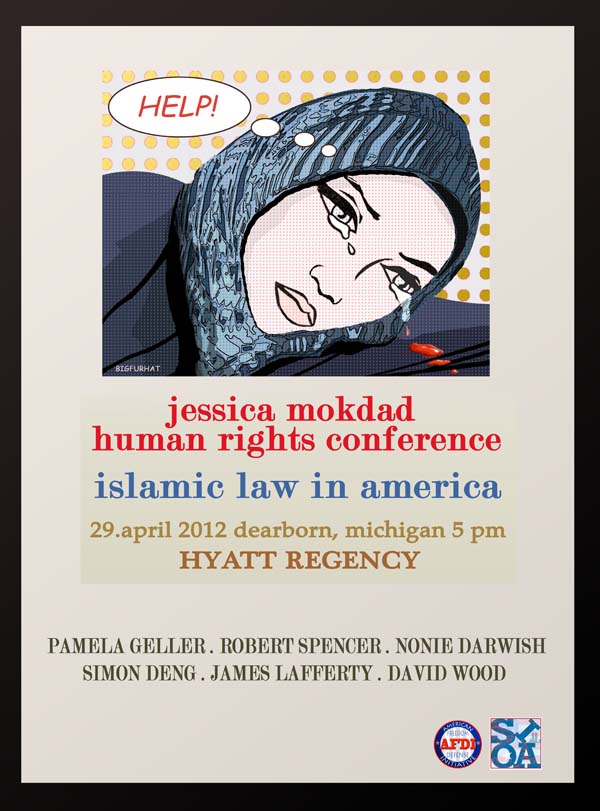 The Jessica Mokdad Human Rights Conference will be held at the Hyatt Hotel in Dearborn. After bowing to Islamic supremacist pressure and canceling a speech by Pamela Geller that had been scheduled for a Hyatt in Nashville, Tennessee, the Hyatt reversed its stance, recovered its understanding of the American principle of free speech, apologized and offered AFDI space in a Hyatt for a future Conference to make it up the human rights organization. Geller chose the Hyatt in Dearborn to stand in solidarity there with girls who are in danger of being victimized like Jessica Mokdad.

Jessica Mokdad was a 20-year-old Muslim woman in Warren, Michigan, who was brutally murdered in May 2011. Fox News Detroit reported: “Authorities say a Minnesota man killed his 20-year-old stepdaughter in Michigan because she left home and wasn't following Islam.” Jessica’s stepfather, a devout Muslim, tracked his stepdaughter over four states to murder her for bringing dishonor on her family.

AFDI Executive Director Pamela Geller said in a statement: “We’ve named the Conference after her as part of our ongoing campaign to raise awareness and bring a stop to the phenomenon of Islamic honor killing. These girls have rights, too, they’re human beings, and yet they’re completely forgotten in our politically correct culture, in which speech that is offensive to Islam is increasingly forbidden. We’re standing for the human rights of girls like Jessica Mokdad.”

Geller added: “AFDI tried to place ads on Detroit-area buses offering help to people wishing to leave Islam and threatened by their families. Detroit SMART Transit refused the ads, and we sued on free speech grounds. We won, and the ads were scheduled to run, but Detroit SMART still refused to run them – and the same week they were supposed to run, Jessica Mokdad was murdered. Perhaps if she had seen one of our ads, she would be alive today. This underscores the cowardice of Detroit-area officials and the need for this Conference in Dearborn. We welcome women seeking help and resources to escape dangerous and misogynist households.”

The confirmed list of speakers includes ex-Muslim human rights activist Nonie Darwish; Sudanese ex-slave and freedom fighter Simon Deng; and James Lafferty of the Virginia Anti-Sharia Taskforce (VAST), co-host of the Conference. Also speaking will be David Wood of Acts 17 Apologetics, a Christian group that is suing the city of Dearborn for covering up Islamic honor killings performed in the area – that cover-up, and the resulting suit, will also be a focus of the Jessica Mokdad Human Rights Conference

Hosting the Conference and also speaking are Pamela Geller, publisher of the acclaimed AtlasShrugs.com blog, executive director of AFDI and SIOA, and author of Stop the Islamization of America: A Practical Guide to the Resistance (WND Books); and AFDI/SIOA associate director Robert Spencer, the bestselling author and director of Jihad Watch.

Stop the Islamization of America is a groundbreaking new book offering the fruit of a veteran national activist’s years of experience fighting back against Islamic supremacist efforts to erode our freedoms. In it, Geller offers the fruit of her experience as the national leader of the fight against the Ground Zero mega-mosque and of numerous other initiatives to defend freedom against the encroachment of Islamic law. She offers practical, tested, effective guidance on how freedom lovers can stop jihadist initiatives in local communities.

AFDI/SIOA is one of America’s foremost organizations defending human rights, religious liberty, and the freedom of speech against Islamic supremacist intimidation and attempts to bring elements of Sharia to the United States.