We hope you had a good holiday honoring those who fought and died for our freedom. Here’s news from the home front.

The AFDI demo against CUNY’s obscene invitation was a smashing success, with over a thousand people who came out in a downpour of pelting rain on East 42nd Street outside CUNY’s headquarters on Thursday afternoon to oppose the mainstreaming of evil — CUNY’s obscene invitation to a pro-terror Jew-hater to keynote their commencement address. It was an amazing event, a turning point, despite Mayor de Blasio’s nefarious attempts to undermine and destroy the rally.

The demo received a lot of national and international press — all of it (with the exception of Israel National News and the Forward) was hostile, of course.  Fake news nonparallel.(scroll down for photos and media coverage links). The Daily News just out and out made stuff up.  Their headlined screamed, “Wild brawl,” which was patently untrue. They said,  “no arrests were made.” But two arrests violent leftists were arrested . Did the NYDN even call NYPD?  I used to work for that paper, I know what whores they are.

We had an army of security and costs related to sound, stage, speakers expenses, hotels etc. Please help us pay for these expenses.

Please contribute here, NOW — or send a check to:

Mayor De Blasio is a longtime supporter of jihad and Muslim supremacists, and most especially terror-supporter Linda Sarsour. Mayor De Blasio gifted Sarsour’s “organization” with more than $500,000. She was instrumental in getting de Blasio to partly dismantle the New York Police Department’s program of spying on the city’s Muslims, and has worked with officials in City Hall to close public schools for the observance of Muslim holy days, Eid al-Fitr and Eid al-Adha. From her base at the Arab American Association of New York, the group whose focus is the sharia device, “Islamophobia,” Sarsour is working to do the same on immigration policy, voter registration, mass incarceration, Islamophobia and the Police Department’s stop-and-frisk tactic.

Mayor de Blasio went to extraordinary lengths to undermine our rally and silence our voices. New York City is no stranger to protests. Protest is a thriving tradition, and with the election of President Trump, is a weekly, sometimes daily, exercise for leftists. So, at this point, the NYPD has it down to a science. Protest organizers apply for a permit, and if there is to be a counter protest, their area is set up across the street, or catacorner to the main event. This is standard operating procedure. During our Ground Zero Mosque protests, the opposition was penned one block over. Every rally and demo is set up in this same way. Which is why what happened at our event was so very extraordinary.

The vicious, vocal and violent protesters were placed right next to the stage, not three feet away from the stage and our crowd. And they screamed, blew deafening whistles, and screamed abusive chants tweets (“Grab that pussy!,” to which we chanted back, “No clit cutting!”). There was no letup (which is why I am shouting the whole of the rally)  and at the end of the demo, the leftists attacked our people and were arrested.

The enemedia did not report on this at all. They drummed up the narrative that the event was violent, with the New York Daily News going so far as to say “WILD BRAWL” in their headline. That’s what de Blasio wanted. He wanted our people attacked and hurt. And the enemedia eagerly advanced the big lie.

That said, despite de Blasio’s attempt to undermine our rally, it didn’t work.

It was huge. And the happy warriors took a stand. 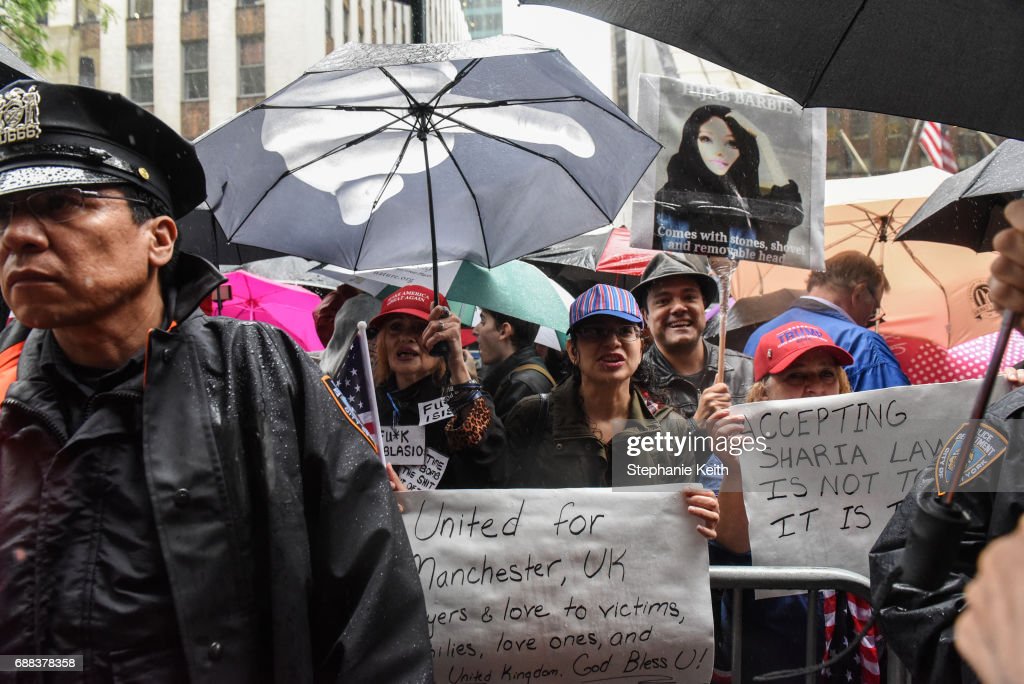 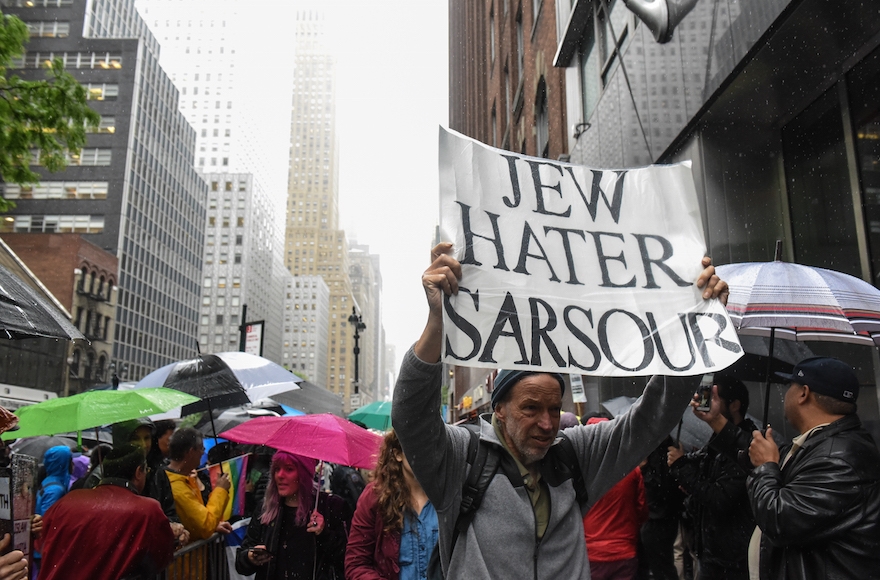 Check out the nationa; and international  coverage:

Ms. Sarsour, one of the lead organizers of the Women’s March on Washington, has tackled issues like immigration policy, mass incarceration, stop-and-frisk and the New York Police Department’s spying operation on Muslims — all of which have largely inured her to hate-tinged criticism.

Protesters clash about Linda Sarsour’s CUNY speech in rainy NYC
The Jerusalem Post – ‎22 hours ago‎
NEW YORK – As hundreds of people gathered on Manhattan’s 42nd street on a rainy Thursday afternoon to protest Linda Sarsour’s upcoming speech at a City University of New York graduation, they were met with vocal opposition from the some of the …

Yahoo News  – ‎May 25, 2017‎
A devout Muslim who hails from Brooklyn, Sarsour was until recently the head of the Arab American Association of New York. She was also one of the organizers of the Women’s March on Washington, D.C., to protest Donald Trump’s presidency. She has a …

USA: Scuffles break out as anti-Sarsour protesters rally outside CUNY

Scuffles broke out as scores of people rallied outside the City University of New York (CUNY), in New York, Thursday, to demonstrate against the university’s invitation for Palestinian-American political activist Linda Sarsour to deliver a commencement speech at a graduation ceremony scheduled on June 1.

Middle East Eye – ‎21 hours ago‎
Protesters in midtown Manhattan chanted and marched under rainfall to criticise the school’s choice of Sarsour, 37, an organiser of this year’s Women’s March on Washington who has drawn fire from conservatives for her opposition to Israel’s occupation …

Washington Times – ‎May 25, 2017‎
Foes of Muslim activist Linda Sarsour held a rally Thursday to decry her selection as graduation speaker at the City University of New York, accusing her of supporting terrorism and chanting, “Surely CUNY can do better!” At a protest outside the CUNY …

Village Voice-May 26, 2017
It was pelting rain on East 42nd Street outside CUNY’s headquarters on Thursday afternoon, but that didn’t keep several hundred people from turning out for a gathering of the Greater New York Area’s far-right tribes.

Protesters in midtown Manhattan chanted and marched under rainfall to criticize the school’s choice of Sarsour, 37, an organizer of this year’s Women’s March on Washington who has drawn fire from conservatives for her opposition to Israel’s occupation of the West Bank and Gaza Strip, among other issues.

Southern Poverty Law Center – ‎2 hours ago‎
Her return to organized protests came on May 25 when she called out City University of New York (CUNY) for inviting Women’s March co-organizer Linda Sarsour to speak at the schools 2017 graduation ceremony. Geller started off the events by calling …

Jewish Telegraphic Agency – ‎10 hours ago‎
… where activists against radical Islam, including Pamela Geller and Milo Yiannopoulos, had rallied in protest of the decision by the institution’s School of Public Health to host Sarsour on Friday as a commencement speaker, the New York Daily News ..

Brooklyn Daily Eagle – ‎May 25, 2017‎
Sarsour, a political firebrand from Bay Ridge, was one of the organizers of the Women’s March on Washington, the massive protest demonstration that took place in the nation’s capitol the day after Donald Trump was inaugurated the 45th president of the …

Please contribute here, NOW — or send a check to: