The media is struggling to suppress the message of our new Quran ads in defense of freedom that are running on 224 NYC subway clocks. Look at this TIME magazine news story. They are running a whole different ad. And the news story is about the ad! Al Arabiya did the exact same thing yesterday. So now American media is talking their talking points from Islamic supremacvists. 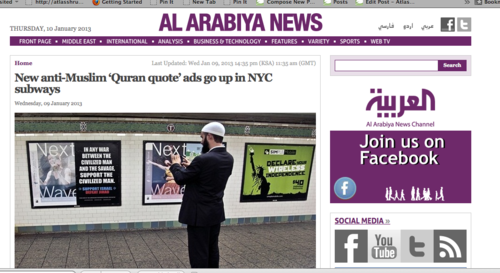 Of course TIME (and other media outlets) never called us for comment. Why would they? We are only the primary news source on this story.

And check our Cyrus McGoldrick — he is not even with Hamas-CAIR NY anymore — leaving under mysterious circumstances. Good job, TIME! They will meet Newsweek’s fate as well. And with good reason.

Check out the headline, “ant-Muslim ads.” Opposing the slaughter of 911 is now “anti-Muslim.” Wow.

BRENDAN MCDERMID / REUTERS Cyrus McGoldrick, a member of the
Council on American-Islamic Relations, attempts to talk to a woman as
she walks by an advertisement that reads “Support Israel/Defeat Jihad”
in the Times Square subway station in New York, September 24, 2012.

The American Freedom Defense Initiative, a conservative organization
infamous for its controversial take against the Islamic faith, has
purchased ad space in 39 subway stations across New York City. When
passengers look up to check the time on 228 of the subway system’s
clocks, they’ll also see a photo of flames engulfing the World Trade
Center accompanied by a quote, attributed to the Quran: “Soon shall we
cast terror into the hearts of the unbelievers.”

The group is well-known for its inflammatory ads. Last September, the
AFDI ran ads implying Muslim radicals were “savages,” declaring: “In
any war between the civilized man and the savage, support the civilized
man.” Though the Metropolitan Transportation Authority initially
rejected the ads, the AFDI sued, citing their right to free speech. The
court ruled in favor of the organization and its outspoken executive
director, Pamela Geller, and the ads went up in 10 subway stations. But
New Yorkers didn’t take well to the posters — Nelson told New York City’s WCBS 880 that “all 10 were defaced or destroyed within an hour.” An Egyptian-American activist and journalist was arrested after publicly spray-painting one of the ads.

And spraypainting/attacking Pamela Hall. Why does Rebecca leave out the most important part of that story?

The Department of Homeland Security advised Washington’s Transit
Authority to hold off on posting the ads in October for security
reasons. Geller immediately sued, claiming the delay violated her First
Amendment rights. Though the judge in the case called the ads “hate
speech,” she ordered the WMATA to display them. Metro riders retaliated
with Post-it notes covering especially offensive words and calls for a boycott from one member of Congress.

The DHS? Snce when? When did that piece of fiction become part of the media narrative? That is brand spanking new.

Bolstered by her continued legal success, Geller railed against her opponents last month, telling New York City’s WCBS 880
that they simply wanted to quash her right to free speech. “I cannot
imagine why anyone would be outraged by the truth, but this is the era
that we’re living in,” she said. “Truth is the new hate speech, and just
telling the truth is a radical act.”

The Metropolitan Transportation Authority says the latest batch of
AFDI subway ads will run for a month – albeit with a disclaimer, taking
up a third of the ad space, clarifying that the views expressed are NOT
endorsed by the MTA.