We’re setting the record straight about our Garland free speech event – and telling the truth about the war on free speech.

One of the plotters of the attack on our free speech event in Garland, Texas last May is on trial now – and a great deal that wasn’t previously known about the attack is coming out.

The media is still not telling the American people the whole story. They’re still reporting that it was our fault that devout Muslims “with Islamic flags and semi-automatic weapons” tried to slaughter hundreds of people standing up for the First Amendment in Texas at our free speech event. By doing this, the media has given its approval to the death penalty for blasphemy under Islamic law.

The fact is — at Garland, in defense of freedom, we saved lives.

— This jihad cell was planning a Super Bowl bomb plot two years ago.

— This jihad cell had been going to remote areas in the city for target practice early in 2014.

— One of the members of the trio exchanged more than 100 messages through social media with an overseas terrorist in the days leading up to the attack in Garland, according to FBI Director James Comey.

— “I believe the shooters were motivated by what they thought was the Islamic State, but I’m not sure they were directed by the Islamic State.” What’s the difference? The were conspiring with ISIS regularly days before the attack.

The bottom line is that these devout savages meant to carry out an unspeakable act of jihad.

We are determined to stand for free speech and show that at least some Americans were not ever going to give in to the violent threats Islamic jihadists have issued against those who draw cartoons of Muhammad. Giving in to a bully only encourages more bullying. I made a stand for free speech, and the jihadis failed to stop me.

What was truly shocking, however, was what happened next. Even as I received a death fatwa from ISIS, instead of standing with me for the freedom of speech, the mainstream media and even many towering figures on the right lined up to denounce me. It was no surprise that the likes of Alisyn Camerota of CNN would spar with me in a contentious interview over the propriety of not kowtowing to Sharia blasphemy laws, as she would have me do. It was more surprising that Bill O’Reilly would denounce my event, and even more so that Laura Ingraham would do so. Most surprisingly of all, Donald Trump crudely and rudely censured me for daring to draw Muhammad. All these and other supposed stalwarts of the right showed that they had no idea how seriously free speech is imperiled, and how crucial it is that we stand and defend it now.

My event was smeared as “needlessly provocative,” and I was accused of grandstanding and even inviting the jihad attack. It was the jihadis, not I, who made the cartoons a flash point. If we surrender on that point and stop drawing Muhammad, we’ve established a precedent of surrendering to violent Sharia enforcement, and once established, we will be made to reinforce it again and again.

It’s time to set the record straight: I’ve begun preparing a new documentary on the Garland attacks – a follow-up to my acclaimed 2011 documentary, The Ground Zero Mosque: The Second Wave of the 9/11 Attacks.

This much-needed new documentary won’t just give you the inside story of what happened in Garland and why. It will lay out the full and appalling details of the all-out assault on the freedom of speech that is taking place today – and why this may be the most crucial battleground today in the war for the survival of the United States of America as a free republic.

This documentary will feature new and exclusive interviews with me, Dutch freedom fighter Geert Wilders, who was the keynote speaker at the Garland event, and Muhammad cartoon contest winner Bosch Fawstin. These will reveal events at Garland and its aftermath that have never before been revealed to the public.

The movie will also be packed with seldom-seen news footage and revealing details not only of the Garland event and the jihad killers who wanted to wage jihad there, but also of the many other battlegrounds in the war for free speech that led up to the Garland attack, including the death fatwa issued in 1989 by the Islamic Republic of Iran against Salman Rushdie for his supposed blasphemy in The Satanic Verses; the assassination of Theo Van Gogh by a Muslim on an Amsterdam street in November 2004 for his alleged blasphemy; the Dutch newspaper Jyllands Posten’s cartoons of Muhammad, published in September 2005, which touched off international riots and killings by Muslims – and most disturbing of all, calls in the West for restrictions on the freedom of speech; the Organization of Islamic Cooperation’s years-long struggle at the UN to compel the West to criminalize “incitement to religious hatred” (a euphemism for criticism of Islam); and the U.S. under Obama signing on to UNCHR Resolution 16/18, which calls on member states to work to restrict incitement to religious hatred.

We’ll cover lesser-known skirmishes in the war against free speech as well, such as Seattle cartoonist Molly Norris’ “Everybody Draw Muhammad Day” in 2010, after which Norris was forced to go into hiding and change her identity after threats. And we’ll trace out what immediately led up to my Garland event – most notably, the January 2015 massacre of Muhammad cartoonists at the offices of the Charlie Hebdo satirical magazine in Paris and the subsequent “Stand with the Prophet” event in Garland, at which Muslim groups gathered in the wake of that massacre not to defend free speech, but to complain about “Islamophobia,” while I led AFDI members and supporters in a protest outside.

It was at that AFDI protest in Garland that I conceived the idea of holding the Muhammad Art Exhibit and Cartoon Contest in the same venue: to show that there were some people who would not submit to (and thereby encourage) violent intimidation and voluntarily accept Sharia blasphemy laws. This film will set all that out, and will also include footage from the event itself, including remarks from me, Wilders, and Fawstin.

Above all, We’ll set out the media firestorm that followed, as well as the attempts to kill me, and explain why the event’s detractors were all missing the point: the freedom of speech doesn’t apply only if you like the message; it applies to everyone. And if it is gone, so is a free society.

A documentary of this scope isn’t easy to make. Will you help us?

The implications of my Garland event are far larger than the event itself. The reaction to our event indicates how advanced the Islamic war on free speech is, and how close the leftist and Islamic supremacist authoritarians are to final victory and the death of free speech.

This film is an attempt to stop them before they achieve final victory. What will America choose? Freedom or submission? The choice is before her now. Please help us make this film. Your donation to the American Freedom Defense Initiative is tax-deductible, and may be the most important donation you will make this year. The darkness is setting in. We’re shining a light. And we need your help. 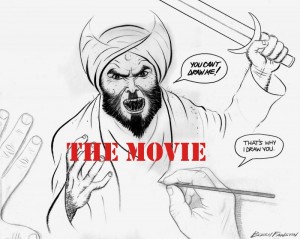