With three jihadis dead and two jihadis jailed in attempts to kill me since my free speech event in Garland, Texas last May, the SPLC’s designation of me as an “Islamophobe” and “hatemonger” is just encouraging more jihadis to come after me — and the other women this Communist hate group names. At a time when jihad killers are moving actively against those whom they hate in the U.S., this is a quite literal hit list. If any of the people named on this list are attacked or killed by jihadis, the SPLC ought to be shut down and prosecuted for incitement — not that such a thing is likely to happen in Obama’s America. Instead, Obama will probably send the SPLC a letter of commendation the week after the killing, as he did with the Oklahoma mosque after a Muslim beheaded one of his coworkers there.

Consider this. The SPLC lists my organizations as hate groups. AFDI, the American Freedom Defense Initiative, is a human rights organization dedicated to freedom of speech, freedom of conscience, and individual rights is designated a hate group by a vicious uber left, pro-jihadist organization widely cited by the media and Obama’s Department of Justice. My group is a human rights group, but the Nation of Islam has been removed from the SPLC’s hate group list. This is the morally inverted state of the world.

Even worse, under the guise of “tracking domestic terrorism,” Obama’s battering ram, the Department of Justice, is colluding with the SPLC to target Americans who oppose Obama’s anti-American domestic and foreign policies. Will Obama employ his “global police force” to go after patriots, vets, tea parties, and counter jihadists?

The SPLC is not a group dedicated to the defense of human rights. It is a hard-left attack machine. Vets, patriots, and freedom’s defenders are in its cross-hairs. Even Presidential hopeful Ben Carson was on their hate list for some time.

Even worse, members of the SPLC have committed a number of acts of terrorism. Several years ago, SPLC member Floyd Corkins stormed the Family Research Council’s Washington, D.C. headquarters and began shooting. Why? Because the FRC had been listed as a hate group by the SPLC. Corkins shot a brave security guard in the arm, but the guard still managed to wrestle him to the ground before he could kill or injure others. Family Research Council President Tony Perkins stated: “Corkins was given a license to shoot an unarmed man by organizations like the Southern Poverty Law Center that have been reckless in labeling organizations as hate groups because they disagree with them on public policy

The SPLC is a dangerous subversive organization that partners with Islamic supremacist and other treasonous groups to destroy America from within. A DOJ official praises the Southern Poverty Law Center’s work in “combating domestic terrorism.” But members are violent domestic terrorists. The communists over at the Southern Poverty Law Center are among the gravest threats to freedom in the United States, “a wellspring of manufactured hate” and are named as such in the AFDI Threats to Freedom Index.

Who watches the watchmen? Who appointed this vicious group the arbiter of what is hate and what isn’t? Why is fighting for the freedom of speech and the equality of rights of all people now classified as “hate”? An uncritical, uninformed public takes for granted that the SPLC is some kind of neutral observer, when actually it uses its “hate group” classifications to stigmatize and demonize foes of its political agenda.

Conservative critics of the Southern Poverty Law Center (SPLC) have long argued that the group, which claims to be an organization “that combats hate, intolerance, and discrimination,” operates as a far-left group that seeks to advance its agenda by attempting to silence and delegitimize opponents of its worldview.

In a Thursday piece, the Associated Press highlights the voices of constitutionalists who contend, the AP argues, that the SPLC is “actually focused on silencing conservative viewpoints — sometimes with serious consequences.”

The piece tells the story about two police officers who were fired after they were found to be members of a group defined by the SPLC as a “racist, neo-Confederate organization.” One of the officers, Josh Doggrell, strongly contests those charges.

He alleged the SPLC officials “have got an opinion like everybody else does and that’s all it is, is an opinion about ideology.”

Republican presidential candidate Ben Carson succeeded where Doggrell failed, receiving an apology from the group for being labeled an “extremist.” The article on Carson, the SPLC later said in a statement, “did not meet our standards, so we have taken it down and apologize [sic] to Dr. Carson for having posted it.” The AP suggests the mounting accusations against the group may indicate this sort of error is increasingly common on the part of the SPLC, citing the Carson incident as evidence even the SPLC is aware “its labels aren’t always foolproof.”

The Associated Press report appears shortly after the SPLC’s decision to designate the Center for Security Policy (CSP), a national security think-tank in Washington, D.C. that has long been on the frontlines in the fight against radical Islam, a “hate group.” The SPLC has begun to blame the rise of jihadi terrorism in America on alleged anti-Muslim talking points from Republican presidential candidates and groups like the CSP, who track jihadist organizations operating against the United States. The candidates almost unanimously agree that the United States should not be taking in refugees from the civil war in Syria, due to the fact that there is no way to screen them out from being potential Islamic State members. The SPLC has labeled their concerns over the safety of Americans “anti-Muslim,” the AP says.

Frank Gaffney, the President and Founder of CSP, firmly rejects the SPLC’s labeling of his defense think tank.

“For 25 years, the Center has worked to secure freedom against those who hate it, including Islamic supremacists, who explicitly seek to suppress free speech and ultimately destroy our constitutional republic and every form of government other than sharia law,” Gaffney told Breitbart News. 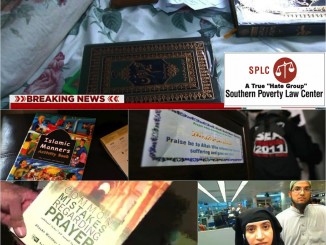 SPLC: “Domestic terrorism like the attack in San Bernardino last year….. are the propaganda work of anti-Muslim ideologues like Pamela Geller”