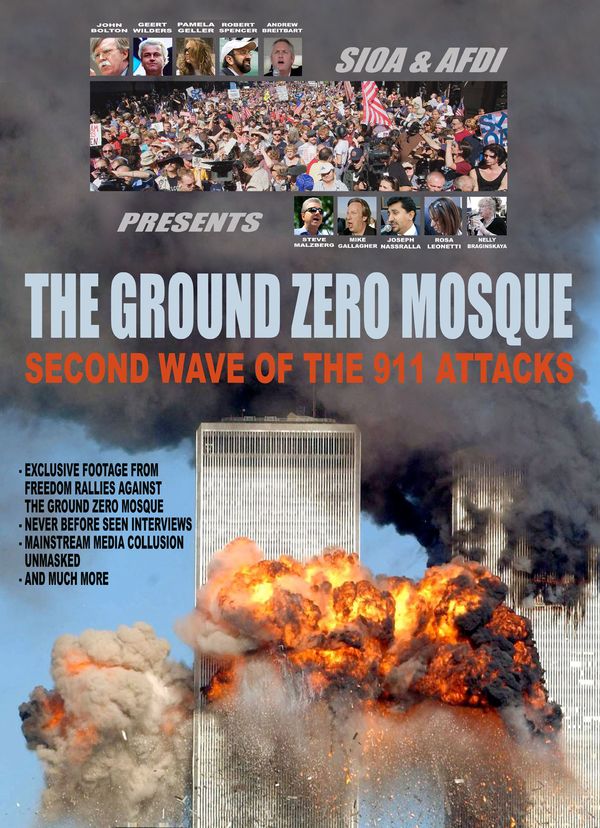 The long awaited world premiere of The Ground Zero Mosque: The Second Wave of the 9/11 Attacks, a groundbreaking new documentary on the controversy over the planned Islamic supremacist mega-mosque at Ground Zero, will be held February 11 at the Conservative Political Action Conference (CPAC) in Washington, D.C. Demand has been so overwhelming that there will be two screenings at CPAC, on Friday and Saturday.

The premiere will be February 11 at 3pm in the Maryland Ballroom of the Marriott Wardman Park Hotel in Washington, D.C. The screening will be followed by a question and action and strategy session on how to stop the Islamic supremacist mega-mosque at Ground Zero. Speakers will include 9/11 family member Rosaleen Tallon; Pamela Geller, Executive Director of AFDI/SIOA; and Robert Spencer, Associate Director of AFDI/SIOA. Ground Zero mosque Imam Feisal Abdul Rauf and his wife Daisy Khan have also been invited to dialogue. Noted Geller: “Now that Rauf and Khan have been fired from the Cordoba mosque, they should have free time for interfaith dialogue.”

Refreshments will be served. The event is open to everyone. A second screening has been scheduled for Saturday at the CPAC Movie Theater.

Geller said in a statement: “The Ground Zero Mosque has become a watershed issue in our effort to raise awareness of and ultimately halt and roll back the advance of Islamic law and Islamic supremacism in America. Although 70% of Americans oppose this insulting victory mosque, the mainstream media continues to propagandize for it, whitewashing the links to jihad terror and unsavory financial dealings of mosque organizers, and smearing the vast majority of Americans who oppose the mosque as racists and hatemongers.”

Geller explained that The Ground Zero Mosque: The Second Wave of the 9/11 Attacks “strikes back against the media liars. This is the first documentary that tells the whole truth about the Ground Zero mosque. Be prepared to be shaken to your core. This movie rips the mask off the enemedia and the malevolent role they play in advancing and propagandizing the objectives of America’s mortal enemies.”

“It’s enlightening, engrossing, and rousing,” Geller said, “but above all, The Ground Zero Mosque: The Second Wave of the 9/11 Attacks is a teaching tool. This film is perfect for showing your skeptical friends and family what we’re really up against, and explaining to them how and why we must fight back. It is the first accurate reportage of the number one national and international news story that became national news without the mainstream media. The press has tried to shape the narrative to demonize the freedom lovers and denazify the Islamic supremacists, but the American people no longer trust big media.”

AFDI/SIOA is rolling out the film nationwide. The New York City premiere will be held on Muhammad’s birthday (according to the Shi’ites), February 20, at the St. Luke’s Theatre, 308 W. 46th Street, New York, at 7:30 pm. To attend, please RSVP to GroundZeroMosque@aol.com.

AFDI/SIOA is also calling upon patriots to set up showings of The Ground Zero Mosque: The Second Wave of the 9/11 Attacks around the country. “This is an unparalleled opportunity for you to raise awareness not only about the Ground Zero mosque issue,” Geller explained, “but about the stealth jihad and Islamic supremacism in general. This film could help you kick off your own local activist efforts, and give you a chance to meet like-minded people who will form the backbone of those efforts.” Geller and Spencer, along with 9/11 family members, are available to address gatherings showing the film.

“We can’t guarantee that you’ll convert every fence-sitter to the counter-jihad cause,” Geller added, “but everyone who sees this film will come away with a unique look at the unscrupulousness and arrogance of the mosque leaders and their accomplices in the mainstream media and the New York City government – and with an inspiring and informative introduction to those who are fighting back on behalf of freedom, and to the ways in which they counter the lies and distortions of the pro-mosque forces.”

If you wish to set up a screening in your town, city, university, public library, shul or church, contact Pamela Geller at groundzeromosque@aol.com.