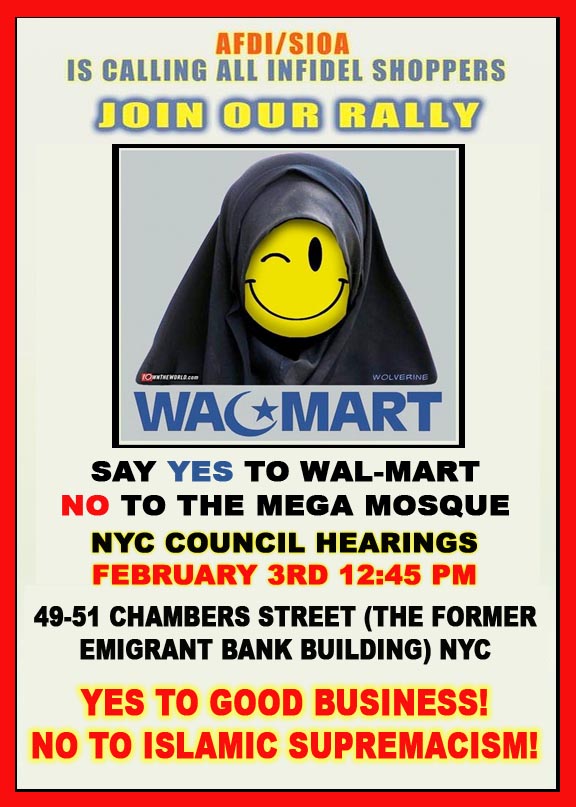 Do the right thing. Stand for what's right. Fight supremacism.

The Ground Zero mega mosque Imam Rauf is kicking off his US mosquestrosity tour at a Hamas conspirator banquet.

The Ayatollah of Bloomstan is working feverishly to erect the Ground Zero mosquestrosity. This is the madman's focus. The NY snowstorm exhibited what a bloody failure this quisling is, bullied by organized labor and unions that did nothing the first 24 hours.

The same malevolent power is pulling the strings behind the Wal-Mart ban, and the NYC Council is only to happy to serve its master. NYC Council Speaker Christine Quinn is a shrill mosque shill. She and Bloomberg's toolbox are refusing to allow jobs and lower prices in Manhattan. Who do these officials represent?

Ninety pages of e-mails dating back to 2009 show that Imam Feisal Abdul Rauf and his wife Daisy Khan relied heavily on City Hall for advice and assistance as they moved forward in their plans to build a mosque and community center two blocks north of the World Trade Center.

After the pair presented their vision to Community Board 1’s Financial District Committee in May, Nazli Parvizi, commissioner of the mayor’s Community Affairs Unit, ghostwrote a letter from Khan to CB1 Chairwoman Julie Menin, thanking Menin for supporting the project.

After several back-and-forth e-mails tweaking the letter, Parvizi advised Rauf to get it to Menin as soon as possible to "keep her on your good side."

"We need some guidance on how to tackle the opposition," Khan wrote to Shama on May 10, as the first wave of press reports about the plans flooded in.

Earlier in the year, Shama also helped secure a temporary Buildings Department permit so Rauf could continue holding Friday services in the future mosque site at 45-51 Park Place, which does not have a certificate of occupancy.

They're emailing each other?

Please protest the Ground Zero Mosque at these ridiculous communist hearings. Expose the hyprocrisy of the NYC Council and Bloomberg's toolbox. No Wal-Mart, but taxpayer funds for a 15-story victory mosque in a building destroyed in the 911 attacks.
I do not share their death wish. They answer to the people. Not the other way around. Be there.
Come with signs. Here are sign ideas. 9/11 families were joined by immigrants from India, Russia, Egypt, Israel, Africa, Iran and Europe to show opposition to the construction of a mega-mosque at Ground Zero. Others flew in from overseas to speak or just to share their particular ethnic communities’ experiences at the hands of moslems. These are parents and spouses of firefighters killed on 9/11.

Park51 backers aiming to build a 13-story Muslim Center near Ground Zero claim they will be constructing a much needed community center for the downtown neighborhood, yet a $73 million, 60,000-square foot community center is already under construction a few blocks away.

The Battery Park Community Center is being built within the base of two new [unintelligible] Properties high-rise residential condominium towers: the Liberty Lane and Liberty Green, now under construction on North End Avenue.

The community center project itself was designed by Hanrahan Meyers with the goal of the highest environmentally friendly Leadership in Energy and Environmental Design (LEED) platinum certification being overseen by environmental consultants [unintelligible].

Kevin G. Harney, principal and CFO of Stalco Construction, which is building the community center, said that while some companies find LEED work challenging, they found it “enticing,” because they have been involved in many other LEED projects.

“From air quality to debris removal, we are under strict guidelines,” Harney added.

The community center will be housed on the street level, in a mezzanine and on two underground levels of the towers. Along with the main lobby with an atrium, the facilities will include an adult swimming pool, a children’s pool, a gymnasium and fitness center, locker rooms, a theater/auditorium, dance studios, classrooms, offices, a cafeteria, kitchen, bathrooms, and storage and equipment rooms.

Even those that are simply passersby will be drawn to the curving 550-foot long outer glass arcade wall that runs alongside two ball fields and a soccer field facing West Street just north of the World Trade Center site. The arcade wall will feature a patterned interpretation of a composition, “Water,” commissioned by composer Michael Schumacher, said Thomas Hanrahan, RA, and a partner with Hanrahan Meyers’ Partner.

“Schumacher’s composition is represented visually in the digitized form in the pattern of the glass wall,” noted Victoria Meyer, a partner with Hanrahan Meyer. “The music will be also accessible through a smartphone application that will allow visitors to hear the score simply by pointing their phones at the wall, with different sections playing a different part of the composition.”

Inside the building, the glass wall fronts two swimming pools and a gymnasium. The interiors will feature metal panel and plaster over concrete ceilings, tile flooring, along with a sports hardwood floor inside the gymnasium.