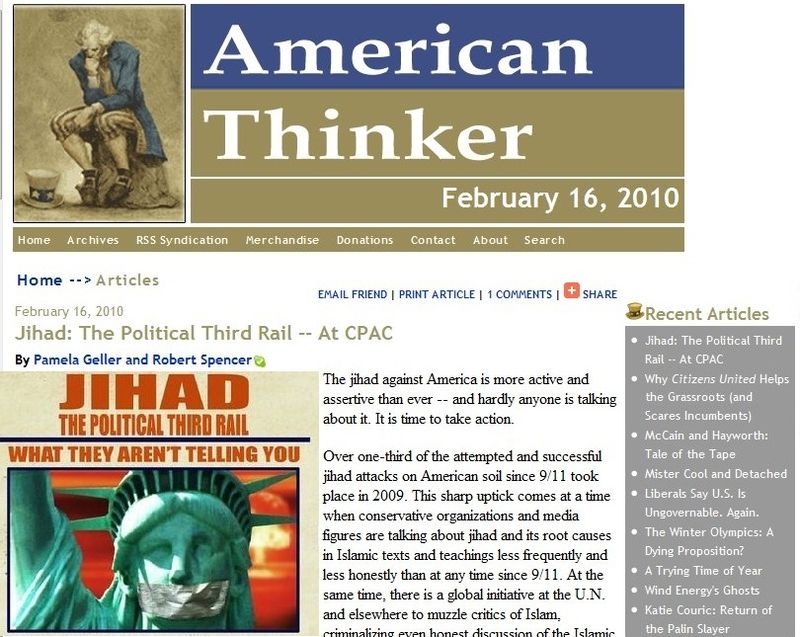 The FDI Event at CPAC is the lead story at the American Thinker today:

The jihad against America is more active and assertive than ever — and hardly anyone is talking about it. It is time to take action.
Over one-third of the attempted and successful jihad attacks on American soil since 9/11 took place in 2009. This sharp uptick comes at a time when conservative organizations and media figures are talking about jihad and its root causes in Islamic texts and teachings less frequently and less honestly than at any time since 9/11. At the same time, there is a global initiative at the U.N. and elsewhere to muzzle critics of Islam, criminalizing even honest discussion of the Islamic doctrines that terrorists use to justify jihad violence and Islamic supremacism.

Now we have created an organization to stand up against this silence that threatens to our existence and render us defenseless as our freedoms and way of life are eroded away. We are launching the Freedom Defense Initiative, a new activist group, at the Conservative Political Action Conference (CPAC) 2010, with a conference entitled "Jihad: The Political Third Rail — What They Are Not Telling You."

Our nation is at war, and yet our politicians pretend that that war isn't happening. Barack Obama is intent upon trying enemy combatants in that war in civilian courts and making concession after concession to our enemies as if those concessions will make them love us. The mainstream media, both liberal and conservative, and the entire government and law enforcement apparatus appear determined to obfuscate and deny the truth about the enemy's ideology and belief system. This has the effect of minimizing in the minds of Americans the threat just as it is greater than ever and of rendering us blind to very real threats from people and groups that officials seem intent upon assuming to be innocuous.
Like it or not, we are engaged in a defense action against an Islamic jihad — one whose goals and motives are spelled out in the Koran and the teachings of Islam. Politically correct dissembling about this only makes Americans more vulnerable than they could be or should be.
The conference is designed to speak the truths that others will not speak. It will educate Americans about the Muslim Brotherhood's infiltration at the highest levels of the U.S. government, as well as its war on free speech: its attempt to silence and discredit those who speak up against the jihad and Sharia encroachment in the West. Emphasis will be on the international character of the jihad against the West and on how the Islamic war on free speech (and the media's self-imposed blackout on this issue, as in the Fort Hood massacre) is part and parcel of the same jihad against the West that terrorists are pursuing by violent means.
This conference will be held at the Mariott Wardman Park Hotel, the site of CPAC, on February 19, from 10AM to noon. It is at the site of CPAC, but it is an independent event supplying the crucial information that the mainstream media (as well as the conservative establishment) ignores. We chose CPAC because it is the largest gathering of conservatives across America, and so it is the most appropriate place to end the near-universal silence about the true nature and magnitude of the jihad threat against our nation.
The principal speakers will be Steve Coughlin and Wafa Sultan. Wafa Sultan shot to international fame after she stood up for human rights against Sharia on Al-Jazeera in a debate with an Islamic cleric on a famous viral video. She is the author of a blistering indictment of Islam's denial of rights to women and non-Muslims, A God Who Hates.
Steve Coughlin is the former Pentagon Islamic law specialist who is making his first public appearance since he was fired from the Defense Department after pressure from Islamic infiltrators. He has startling information about Islamic infiltration in our government.
Other speakers include Simon Deng, a former slave in Sudan and a leading human rights activist against jihad and Islamic supremacism; Elisabeth Sabaditsch-Wolff, who is facing "hate speech" charges in Austria for telling the truth about Islam and the Islamization of Europe; Anders Gravers of the group Stop the Islamisation of Europe (SIOE); and Lt. Colonel Allen West, a war hero, Congressional candidate (FL 22nd district), and future national leader who offers a real alternative to Obama's socialism at home and appeasement abroad.
This event is supplying truth that you will not hear elsewhere, and on which hangs the very future of our nation.
We hope to see you there.
Pamela Geller is the editor and publisher of the Atlas Shrugs website, a columnist for Newsmax and Big Government, and a former associate publisher of the New York Observer. Robert Spencer

is the director of Jihad Watch and the author of the New York Times bestsellers The Politically Incorrect Guide to Islam (and the Crusades) and The Truth About Muhammad. They are coauthors of The Post-American Presidency: The Obama Administration's War On America (coming in July from Threshold Editions/Simon & Schuster