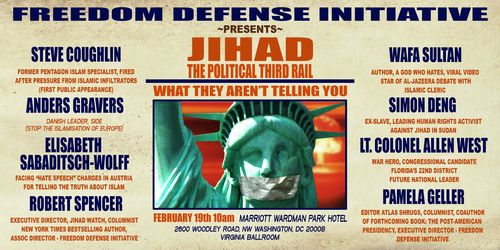 Jihad: The Political Third Rail – What They Are Not Telling You is a conference featuring some of the premier American and international voices of resistance to the global jihad and Islamic supremacism. This inaugural event of the Freedom Defense Initiative (FDI), a new activist organization founded by myself and Robert Spencer,  will be held at the Mariott Wardman Park Hotel, the site of CPAC, on February 19 from 10AM to Noon, in the Virginia Ballroom.

The conference is designed to educate Americans about the Muslim Brotherhood’s infiltration at the  highest levels of the U.S. government, as well as its war on free speech: its attempt to silence and discredit those who speak up against the jihad and Sharia encroachment in the West. Emphasis will be on the international character of the jihad against the West and on how the Islamic war on free speech (and the media’s self-imposed blackout on this issue, as in the Fort Hood massacre) is part and parcel of the same jihad against the West that terrorists are pursuing by violent means.

Late in 2007, Major Stephen Coughlin, USAR, the Pentagon’s lone expert on Islamic law (Sharia) on the Joint Staff, was asked by Hesham Islam, special assistant for international affairs for the Deputy Secretary of Defense, Gordon R. England, to moderate his statements about Islam’s doctrines mandating warfare against and the subjugation of unbelievers. In response, Coughlin, cited Islamic sources to show that he was portraying Islamic teaching accurately. According to journalist Bill Gertz in the Washington Times, Islam and other Muslims in the Pentagon then began campaigning to have Coughlin fired, calling him a “Christian zealot with a pen.” Ultimately, Coughlin’s contract was not renewed.

This was despite the high quality of Coughlin’s work. Said retired Air Force Lt. Gen. Thomas McInerney: “Steve Coughlin is the most knowledgeable person in the U.S. government on Islamic law.” LTC Joseph C. Myers, Army Advisor to the Air Command and Staff College, told the truth: “The termination of Stephen Coughlin on the Joint Staff is an act of intellectual cowardice.”

Coughlin insisted that we must speak clearly about the nature of the threat we face. In his thesis, “‘To Our Great Detriment’: Ignoring What Extremists Say About Jihad,” submitted to the National Defense Intelligence College in July 2007, he argued that the politically correct refusal to name the enemy was placing the United States at a strategic disadvantage.

Even worse, according to terrorism expert Steven Emerson, Hesham Islam was “an Islamist with a pro-Muslim Brotherhood bent who has brought in groups to the Pentagon who have been unindicted co-conspirators.” Gertz reported that Islam had brought Muslim Brotherhood operatives into Pentagon community outreach programs: “Coughlin came under fire from pro-Muslim officials after a memorandum he wrote identified several groups that are being courted by Mr. Islam’s community outreach program as front organizations for the pro-extremist Muslim Brotherhood.” Islam also prevailed upon England to host members of the Islamic Society of North America, a Brotherhood organization, at the Pentagon in April 2008, “raising concerns,” said Gertz, “that the deputy defense secretary does not understand clearly the nature of the Islamist threat he is working against as the No. 2 official.”

The Stephen Coughlin affair illustrated most vividly the infiltration at the highest levels of the U.S. government. At the Freedom Defense Initiative event, Coughlin will make his first public appearance since the sad and telling events that led to his termination from the Defense Department. His message about Muslim Brotherhood influence at high levels of our government is deeply disturbing – and it is crucial that he be heard. 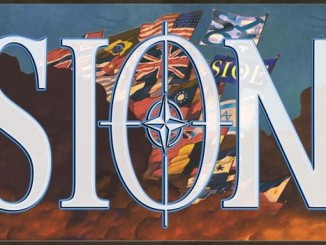