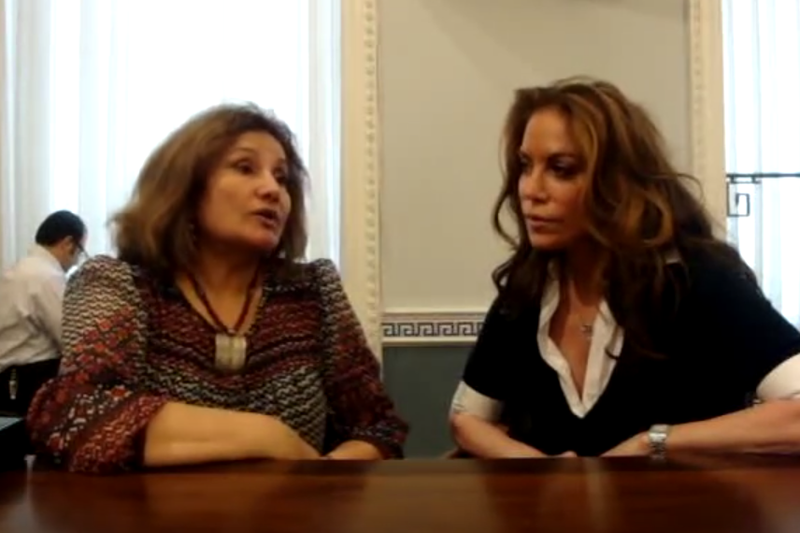 I am thrilled to announce that human rights activist and freedom fighter Nonie Darwish, an ex-Muslim who grew up in Gaza and experienced jihad and Jew-hatred firsthand and repudiated both, has become our first AFDI fellow. In that capacity, Nonie, author of the must-read books Now They Call Me Infidel and Cruel and Usual Punishment will be contributing regular articles here. I am pleased to be able to feature her unique and important perspectives here at Atlas. I'm also very happy to announce that Nonie's groundbreaking and courageous organization, Former Muslims United, will now continue its work as part of the AFDI freedom network. We have worked together on a number of critical projects ie Islamic Apartheid week on college campuses, Former Muslim conferences to aid Muslims who have left Islam, CPAC education programs etc.

Obama’s Conduct Unbecoming By Nonie Darwish, EXCLUSIVE TO AFDI Obama, as the leader of the free world, had the perfect opportunity to speak again to the Muslim world from Antalya, Turkey, during the G-20 summit. But this time, instead of appeasing, he could have talked business to a Muslim world entrenched in self-deception, self-pity, blame, misery, hatred and terror. He could have finally done what many needed him to do; to demand from Islamic religious and political leadership to change course to end the glorification of the jihad culture, hate education and take responsibility for creating a culture of terror. He could have demanded an end to the paranoia against the West and the centuries long breeding of millions of Muslim young men believing that honor, glory and love of country means dying for the sake of Allah in martyrdom operations against perceived enemies of Islam. That would have been the appropriate thing to do by the leader of the free world after over 14 years of non-stop Islamic terror threats and attacks on the West by Muslims. Obama would have been uniquely qualified for that long awaited moment of truth with the Muslim world, for a plea to Muslims to make peace with themselves and with the West for the sake of peace and prosperity for all. But after the Paris terror attack, Obama chose to yet again defend Islam and shame anyone who dare link Islam with terror. He never even hinted at time for an Islamic reformation movement. Obama’s missed opportunity to demand an Islamic reformation, might have upset many Muslims, but would have started a worldwide discussion among Muslims to be open with self-criticism and looking within instead of attacking the outside for solutions. Obama instead provided Muslims with yet more excuses for Islamic terror, when he insisted that we couldn’t stereotype and judge. After the terror attack on Paris, Obama still chose to reprimand legitimate critics of Islamic jihad. He warned against “equating the terrible actions that took place in Paris terrorism with the views on Islam.” He insisted, “Those stereotypes are wrong and counter-productive.” No word from him was addressed to the Islamic world, but warnings to the West. It is time for Western citizens to stand firm to demand better from their leaders and say enough with Western leaders appeasing a constantly offended Muslim world; enough with Western leaders speaking from a position of weakness before a terrorized and neglected Western population who are constantly blamed for Islamic discontent; enough with claims that “Islam is a religion of peace” and “Islam has nothing to do with terror” business, because it is no longer a valid argument by anyone, let alone Obama, whose job qualification is, first and foremost, to protect American citizens. Obama so far have done everything he could to please Muslims, and that makes him especially credible today to make demands on Muslims to start an Islamic reformation after the horrific terror attacks on Paris. Many Muslim political leaders are themselves fed up with radical Islamist groups threatening to bring their governments down. Egyptian president Al-Sisi himself, who risked being labeled an apostate, when he stood before Al Azhar leaders, demanding sweeping reforms in Islam. Putting aside whether Islam is good and peaceful or not, it is a fact that world wide Islamic terrorism is the product of the cultural, educational and religious teachings long practiced in Muslim countries. That must change and Western leaders must step up their efforts to protect their Western citizens, culture and way of life. It is gross negligence for Western leaders to gamble with the safety and security of their citizens for the sake of taking in refugees from an area of the world plagued with Islamic terrorism and sympathizers. It is unbecoming for the president of the US to keep defending Islam and lecturing his citizens on tolerance of the intolerant. It is infuriating for Americans, and rightfully so, after acts of Islamic terror on US soil with chants of Allahu Akbar, for the president of the USA to call them ‘work place violence’. It is redundant and useless to keep perpetuating the argument that terrorism has nothing to do with Islam, because it is no longer working. True or not, appearances do count. Obama is inappropriately becoming the number one defender of Islam, among world leaders today. Obama’s bizarre and constant defense of Islam after every Muslim terror attack on American soil is not only drawing the attention and raising eyebrows of American citizens, but also promoting distrust among Egyptian reformists who are fed up with Islamic terrorism and the Muslim Brotherhood. The distrust of Obama is publicly expressed in Egypt in a front-page article in Egyptian newspaper — Al-Wafd —that recently and specifically accuses Obama of being a member of the international organization of the Muslim Brotherhood. Many people are openly asking if Obama is a Muslim, but that does not matter because it is his actions and not what is in his heart that counts. Many respected journalists are describing Obama as ‘delusional’ after his Turkey comment, but the problem points to us, the voters of America, who have given Islamism its best gift ever after 9/11; the election of Barak Hussein Obama. Nonie Darwish Author “The Devil We Don’t Know”