We are taking our free speech fight to the Supreme Court. AFDI vs. Boston’s transit authority. The Massachusetts Bay Transportation Authority’s (MBTA) refused to our two pro-Israel/anti-jihad advertisements on their buses. Yes, Boston. The MBTA claimed it was demeaning to Muslims – as if all Muslims were Jew haters and jihadists. Wait, it get’s worse. The Boston has allowed to run and continues to run vicious anti-semitic ads. Libels and lies against Israel.

Let us step back for a moment and review. Imagine this, in a city repeatedly wracked by Islamic terror attacks –the blood of its citizens stain the streets of the city –the Boston government refused to run our ads opposing jihad.

— the Boston Marathon jihad bombing –Last month, Boston jihadis were taken out before they beheaded policemen and me –This month, Abu Ali al-Amriki the Muslim convert son of a Boston police captain plotted to bomb college campus cafeterias during lunchtime (to maximize death toll) with bombs filled with nails, ball bearings and glass

The former imam of the Islamic Society of Boston, Suhaib Webb, is revered in the mainstream media as a “moderate,” but he has actually denounced secularism as a “radical lunatic ideology.” Webb also once headed up a fund-raiser for a cop killer with arch-terrorist Anwar al-Awlaki. That didn’t stop the Boston Globe from running a piece several days ago titled “Inclusive spirit reassures Muslims after bombings,” as if Muslims had been the victims of the Boston Marathon bombing, not its perpetrators. This was the same mosque about which Fox News reported after the bombing “has a controversial history, with ties to the Muslim Brotherhood, terror funding and frequent fiery sermons.” USA Today added, “Its sister mosque in Boston, known as the Islamic Society of Boston Cultural Center, has invited guests who have defended terrorism suspects. A former trustee appears in a series of videos in which he advocates treating gays as criminals, says husbands should sometimes beat their wives and calls on Allah (God) to kill Zionists and Jews.” And now Usaama Rahim, who plotted to murder me in June for violating sharia blasphemy laws, is yet another Jihadist in Boston with ties to the Islamic Society of Boston, just like the Tsarnaev brothers and numerous other Muslim terrorists. Usaama Rahim worked as a guard at the Islamic Society of Boston.

MBTA’s Rejection of Anti-Jihad Ads Heads to Supreme Court, AFLC, July 28, 2015 Yesterday (July 27, 2015), the American Freedom Law Center (AFLC), filed a petition in the U.S. Supreme Court, asking the high court to review a sharply-divided decision of the United States Court of Appeals for the First Circuit, which upheld the Massachusetts Bay Transportation Authority’s (MBTA) refusal to display on its buses two pro-Israel/anti-jihad advertisements, which the MBTA claimed were demeaning to Muslims. The ads were submitted by AFLC’s clients, the American Freedom Defense Initiative (AFDI), Pamela Geller, and Robert Spencer. This past March, a divided panel of the First Circuit affirmed the MBTA’s censorship of the ads, holding that the advertising space was not a public forum; therefore, the heightened level of scrutiny that is typically applied in cases involving government censorship of speech did not apply. As a result, the majority held that the MBTA’s speech restriction satisfied the lower standard of “reasonableness” and viewpoint neutrality. Circuit Judge Stahl dissented and would have held that the MBTA’s censorship violated the First Amendment. The appeal to the First Circuit consolidated two lawsuits filed by AFLC in the U.S. District Court for the District of Massachusetts. In each case, AFLC filed a motion for a preliminary injunction, requesting that the court immediately order the MBTA to display the advertisements. The district court denied the motions, ruling that in light of a prior controlling decision from the First Circuit, the MBTA’s rejection of the advertisements was “reasonable.” Seeking to test the First Circuit’s precedent, AFLC immediately appealed both rulings. The First Circuit consolidated the two cases and affirmed. The two ads at issue appear below: 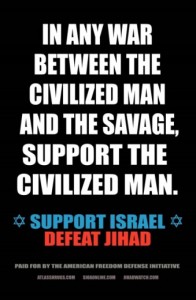 In its petition to the Supreme Court, AFLC highlights the fact that there is currently a split in the federal appeals courts regarding the First Amendment’s application to the display of public-issue advertisements on government transit authority property and that a circuit split is among the most important factors in determining whether the Court should grant review. AFLC Co-Founder and Senior Counsel Robert J. Muise commented:

“The Supreme Court should grant review because the First Circuit’s forum analysis, an essential prerequisite for determining how to apply First Amendment principles, conflicts with the authoritative decisions of the majority of other federal appeals courts that have addressed the question in this very context. Moreover, the MBTA’s ‘demeaning’ speech restriction is inherently view-point based in violation of the First Amendment regardless of the nature of the forum. In short, this case presents exceedingly important questions regarding the right to freedom of speech that the Supreme Court has not, but should, decide.”

“The First Circuit’s decision is fundamentally flawed because it permits the government to pick and choose which ‘political speech’ it deems acceptable, thereby doing irreparable harm to the First Amendment, which is intended to operate as a brake on the government’s power to censor speech. Indeed, the First Amendment is intended to prevent government bureaucrats from being the arbiter of acceptable speech, particularly when that speech addresses controversial political or public issues such as the Israeli-Palestinian conflict. The Supreme Court needs to take up this important case.”