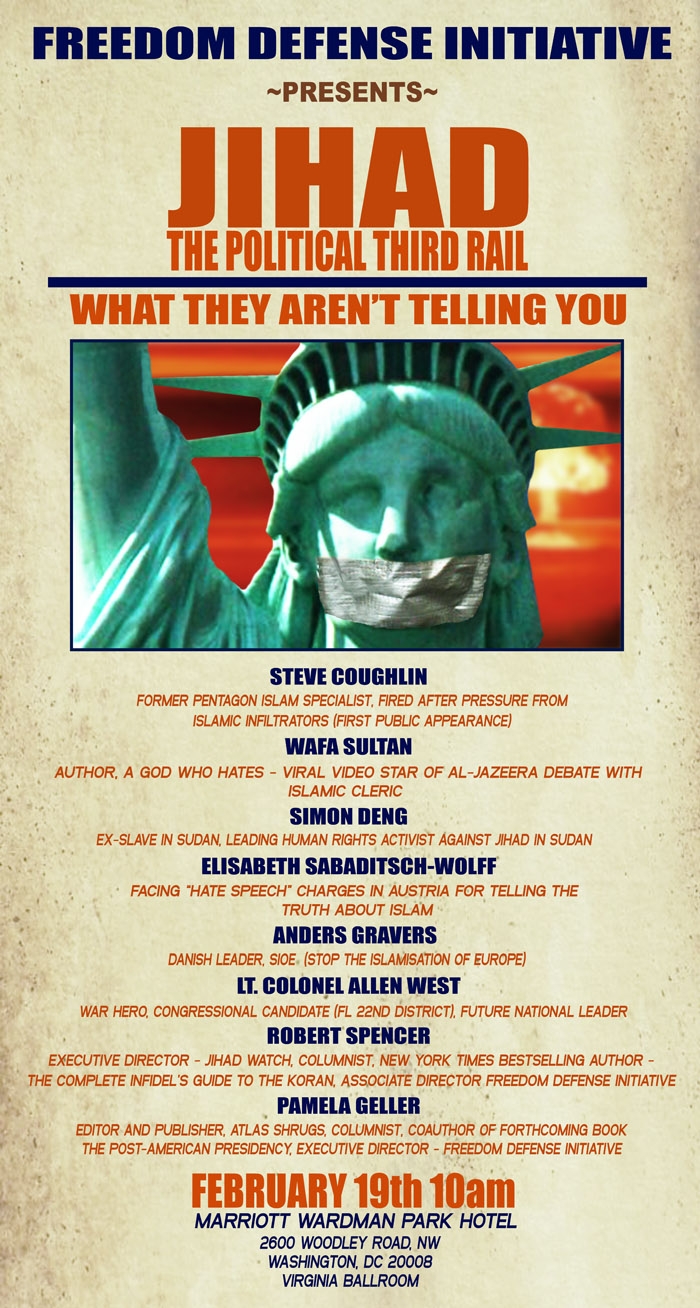 "Wafa Sultan will be testifying for Geert Wilders in his trial to save free speech.

You must register to attend the Freedom Defense Inaugural on February 19th at 10 in Washington, DC

Jihad: The Political Third Rail – What They Are Not Telling You is a conference featuring some of the premier American and international voices of resistance to the global jihad and Islamic supremacism. This inaugural event of the Freedom Defense Initiative (FDI), a new activist organization founded by Pamela Geller and Robert Spencer, will be held at the Mariott Wardman Park Hotel, the site of CPAC, on February 19 from 10AM to Noon, in the Virginia Ballroom.

The conference is designed to educate Americans about the Muslim Brotherhood’s infiltration at the highest levels of the U.S. government, as well as its war on free speech: its attempt to silence and discredit those who speak up against the jihad and Sharia encroachment in the West. Emphasis will be on the international character of the jihad against the West and on how the Islamic war on free speech (and the media’s self-imposed blackout on this issue, as in the Fort Hood massacre) is part and parcel of the same jihad against the West that terrorists are pursuing by violent means.

The principal speakers are Steve Coughlin and Wafa Sultan.

Steve Coughlin is a former Pentagon Islamic law specialist who is making his first public appearance since he was fired after pressure from Islamic infiltrators. He has startling information about Islamic infiltration in our government.

Wafa Sultan stood up for human rights against Sharia on Al-Jazeera in a debate with an Islamic cleric on a famous viral video. She is the author of a blistering indictment of Islam’s denial of rights to women and non-Muslims, A God Who Hates.

Other speakers include Simon Deng, a former slave in Sudan, and a leading human rights activist against jihad and Islamic supremacism; Elisabeth Sabaditsch-Wolff, who is facing “hate speech” charges in Austria for telling the truth about Islam and the Islamization of Europe; Anders Gravers of the group Stop the Islamisation of Europe (SIOE); and Lt. Colonel Allen West: a war hero, Congressional candidate (FL 22nd district), and future national leader who offers a real alternative to Obama’s socialism at home and appeasement abroad.

Sponsoring the event are Pamela Geller, the editor and publisher, AtlasShrugs.com, Newsmax columnist, and author (with Robert Spencer) of the forthcoming book The Post-American Presidency: The Obama Administration’s War On America (Threshold Editions, Simon & Schuster), and Executive Director of the Freedom Defense Initiative; and Robert Spencer, the director of Jihad Watch (a program of the David Horowitz Freedom Center), Human Events and Front Page Magazine columnist, New York Times bestselling author of The Politically Incorrect Guide to Islam (and the Crusades), Stealth Jihad, and eight other books. He is the associate Director, Freedom Defense Initiative.