News Ticker
ITS FRIDAY THE 19TH FROM 10 AM TO NOON, it is only two hours. 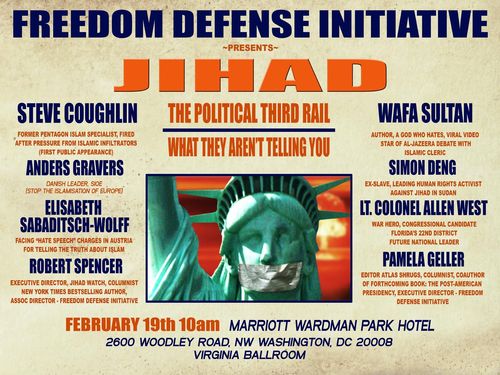 Our inaugural event for FDI is fast approaching — and if you haven't registered or made it your business to get your infidel ass to CPAC for this totally non-CPAC event, then you are still snoozin.

The infiltration is so vast and so deep, that CPAC, the Conservatives' largest gathering in America, does not address jihad. Last year I had to bring Wilders there on my dime (with the help of Spencer, Horowitz, Bostom and his mom).

This year after Obama, it's worse. There is actually a panel called "You've Been Lied To: Why Real Conservatives are Against the War On Terror," and that's it.

Here's event. I will be highlighting each speaker as we move closer to the Day.

Stop the Islamisation Of Europe (SIOE) is an alliance of people across Europe with the single aim of preventing Islam becoming a dominant political force in Europe.

Its motto is “Racism is the lowest form of stupidity! Islamophobia is the height of common sense!”

SIOE exists to legally combat the overt and covert expansion of Islam in Europe and states that Islam and democracy are incompatible due to teachings within the Koran itself and some of the hadiths which comprise sharia law.
Such incompatibility is self-evident when those tenuous democracies in countries where Islam is the dominant religion are scrutinized.
Western values are under the most severe threat from Islamisation, but particularly Europe, at the present time.

The formation of the European Union was done covertly with the European people being kept in the dark about its aims and development.  Democracy has been systematically eroded, the latest example being the Lisbon Treaty.

However, the plan goes much further with the ultimate goal being a Eurabian superstate incorporating Muslim countries of North Africa and the Middle East and the European Union.
This was already initiated with the signing of the Barcelona Treaty in 1995 by the EU and 9 North African States and Israel and which became effective 1st. January 2010. It is also known as the Euro-Mediterranean co-operation.

In return for some European control of oil resources, Muslim countries will have unfettered access to technology and movement of people into Europe.

The price Europeans will have to pay is the introduction of Sharia law and removal of democracy.

Anders Gravers and Thor Poulsen from Denmark and Stephen Gash from England are co-ordinators of SIOE.

And make a donation, Robert and I are doing this all ourelves. This isn't grassroots. This is grass seed, baby.