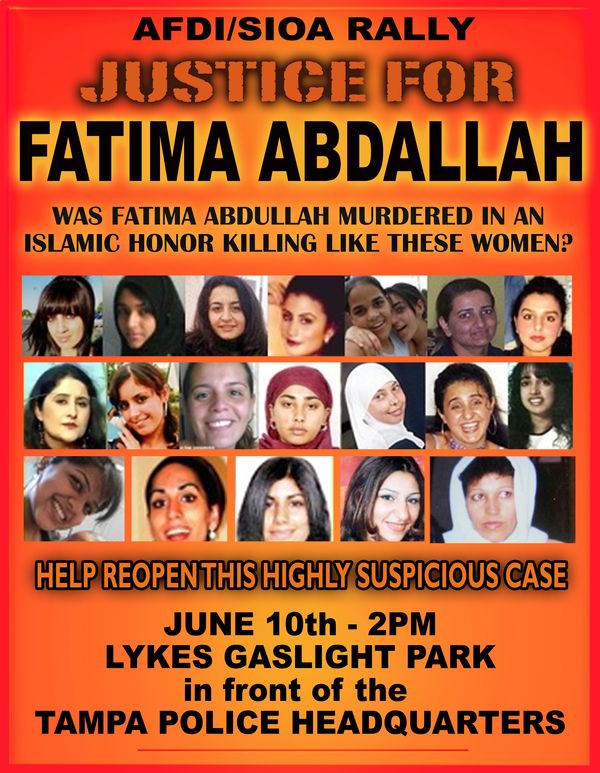 AFDI/SIOA Rally for Justice for Fatima Abdallah to Call On Tampa Police to Reopen Case of Her Suspicious Death Yahoo News
TAMPA, Fla., May 31, 2011 /PRNewswire-USNewswire/ — A prominent national human rights and advocacy organization is calling upon Tampa city and Florida state officials to conduct an honest and thorough investigation into the suspicious death of Fatima Abdallah.

The Florida chapter of the American Freedom Defense Initiative (AFDI)/Stop Islamization of America (SIOA) is holding a Rally for Justice for Fatima Abdallah at 2 p.m. on June 10 at Lykes Gaslight Park in front of Tampa Police Headquarters. The Rally will include a news conference.

Speakers will call upon State Attorney Mark Ober, Tampa Mayor Bob Buckhorn and Tampa City Council Members to recognize the numerous anomalies in the Tampa Police Department report that ruled Fatima Abdallah's death a suicide, and to open a genuine investigation into the possibility that she was murdered in an Islamic honor killing.

The Tampa Police report claims that Abdallah committed suicide by repeatedly striking her head against a coffee table. AFDI/SIOA Executive Director Pamela Geller said in a statement: "The idea defies logic, belies reality." She announced that the Rally for Justice for Fatima Abdallah would feature a great deal of evidence that the Tampa Police investigation was drastically flawed, and that the Police Department and Medical Examiner ignored numerous indications that Fatima Abdallah did not commit suicide, but was brutally assaulted. Then when challenged, their explanation only exposed more inconsistencies and raised more questions.

Geller also pointed out that Fatima Abdallah was "a Muslim woman shunned by her devout Muslim family for her 'shameful' divorce" – and hence a possible victim of Islamic honor killing, in which a woman who has brought "shame" to the family is murdered in order to preserve family "purity." Neighbors reported that Fatima Abdallah was abused by her family, but that they had been too frightened themselves of the abusers to report it.

"We cannot and will not tolerate the covering up of honor killings in the U.S.," Geller said. "Our law enforcement authorities should be standing up against this practice. The cover-up is criminal, and we must protest the silence and complicity of Florida law enforcement. This looking the other way on honor killing is Sharia law — if this family weren't Muslim, law enforcement would have handled this completely differently."

Geller also noted that "at the exact same time of Fatima Abdallah's alleged honor killing, Rifqa Bary was not 85 miles away, fighting for her very life under the same deathly system of misogyny and Islamic domination that Fatima had lived under. Rifqa Bary had escaped to Florida after her father had threatened to kill her when he found out that she had left Islam and converted to Christianity. Ohio and Florida law enforcement refused to address the religious motivation behind the death threat made to Rifqa's life. A brutal honor killing of a Muslim woman not 85 miles away would certainly have swayed the court of public opinion. This is the continuation of self-enforcing Sharia law in America."

The confirmed list of speakers at the Rally for Justice for Fatima Abdallah includes Geller, the popular blogger and columnist who publishes the acclaimed AtlasShrugs.com blog and is the author of The Post-American Presidency: The Obama Administration's War on America (Simon & Schuster); AFDI/SIOA's Associate Director, the bestselling author and internationally renowned Islamic expert Robert Spencer; Nonie Darwish, the ex-Muslim human rights activist and author; David Caton of the Florida Family Association, who conducted a thorough independent investigation exposing the numerous errors and falsehoods in the Tampa Police Department report, James Lafferty of the Virginia Anti-Shariah Task Force; and Larissa Scott, leader of SIOA's Florida chapter.

AFDI/SIOA is one of America's foremost organizations defending human rights, religious liberty, and the freedom of speech against Islamic supremacist intimidation and attempts to bring elements of Sharia to the United States.

Rifqa Bary Link to Fatima Abdallah Honor Killing Former Prosecutor: "She was Beaten With A Vengeance"