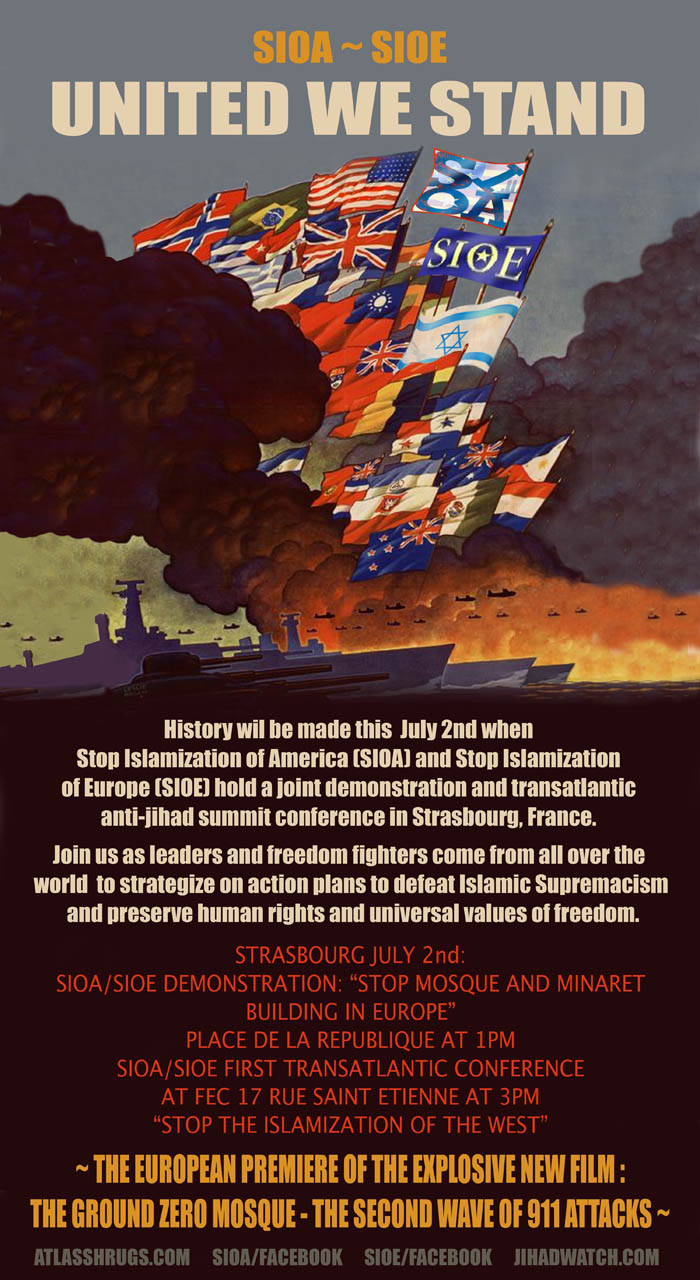 The human rights organizations Stop Islamization of America (SIOA) and Stop Islamisation of Europe (SIOE) will hold their first-ever transatlantic summit in Strasbourg, France, on July 2.

SIOA and SIOE are the foremost organizations in America and Europe that are dedicated to defending human rights, religious liberty, and the freedom of speech against Islamic supremacist intimidation and attempts to bring elements of Sharia to the West.

It will mark the European premiere of the acclaimed SIOA documentary on the Ground Zero mosque controversy, The Ground Zero Mosque: Second Wave of the 9/11 Attacks. The documentary features speakers such as Dutch freedom fighter Geert Wilders, former Ambassador John Bolton, Sudanese ex-slave Simon Deng, and many 9/11 family members and first responders. It also features brand-new interviews with Geller and SIOA associate director Robert Spencer. As many similar mosque initiatives are being pursued in Europe, this film has a particular urgency for Europe as well as America.

The confirmed list of speakers at the summit includes Pamela Geller, the popular blogger and columnist who publishes the acclaimed AtlasShrugs.com blog and is the author of The Post-American Presidency: The Obama Administration’s War on America and the soon to be released Stop the Islamization of America, A Practical Guide to the Resistance; Robert Spencer, a bestselling author and internationally renowned Islamic expert; the noted activist SIOE Director Anders Gravers; Roberta Moore of the Jewish Division — EDL; Conny Meier of the German human rights group Pax Europa; frontrunning Bulgarian presidential candidate Pavel Chernev; and others to be announced soon.

The SIOA/SIOE summit will establish a common American/European coalition of free people who are determined to stand for freedom and oppose the advance of Islamic law, Sharia, which is not simply a religious system, but a political system that encompasses every aspect of life; is authoritarian, discriminatory, and repressive; and contradicts Western laws and principles in numerous particulars.

The SIOA/SIOE Strasbourg summit will begin at 1PM with a demonstration at Place de la République, followed by a conference at FEC 17 rue Saint Etienne at 3PM.

We are a coalition of free people who are determined to stand for the Constitutional principles upon which the United States is based. We recognize that Islamic law, Sharia, is not simply a religious system, but a political system that encompasses every aspect of life; is authoritarian, discriminatory, and repressive; and contradicts U.S. law in numerous particulars.

In defense of freedom, therefore, we oppose the advancement of Sharia in all its manifestations in this country, including:

We call upon all elected officials and law enforcement authorities to take all necessary actions to defend the Constitutional freedoms they have been entrusted with preserving and protecting.

We insist that they apply existing sedition laws to any and all individuals and groups that are advocating adoption in the U.S. of any Sharia provision contradicting U.S. law.

We call upon the mainstream media to report on Islamic supremacist activity, and the resistance to that activity, fairly, fully, and accurately.

We call upon all free people of all races and creeds to stand with us to defend our freedoms against this radically intolerant ideology.

In this effort, we pledge our lives, our fortunes, and our sacred honor.