Which group tied Islam to terrorism? AFDI or Al Qaeda? AFDI or Hamas? AFDI or the Taliban? AFDI or Hezb'allah? AFDI or the Abdullah Azzam Shaheed Brigade? AFDI or the Abu Nidal Organization? AFDI or Abu Sayyaf or Al-Aqsa Foundation or Al Aqsa Martyrs' Brigades or Al-Badr or al-Gama'a al-Islamiyya or
al-Haramain Foundation or Al-Itihaad al-Islamiya or al-Qaeda in the Arabian Peninsula or Al-Shabaab or Takfir wal-Hijra or Al-Umar-Mujahideen or Ansar al-Islam or Jamaat Ansar al-Sunna or Armed Islamic Group of Algeria or
Army of Islam or
Osbat al-Ansar or
Egyptian Islamic Jihad or Great Eastern Islamic Raiders' Front or Izz ad-Din al-Qassam Brigades or Haqqani or
Harkat-al-Jihad al-Islami in Bangladesh or Harkat-ul-Mujahideen or Hezb-e-Islami Gulbuddin or Hezbollah or Hizb ut-Tahrir or Hizbul Mujahideen or Holy Land Foundation
for Relief and Development or Islamic Jihad – Jamaat Mujahideen or Islamic Movement of Uzbekistan or Jaish-e-Mohammed or Jamaat Ul-Furquan or Jamaat-ul-Mujahideen Bangladesh or
Jamiat al-Islah al-Idz or
Khuddam ul-Islam or Lashkar-e-Taiba or People's Mujahedin of Iran or Muslim Brotherhood or Palestine Liberation Front or Islamic Jihad Movement in Palestine or Society of the Revival of Islamic Heritage or Students Islamic Movement of India or Supreme Military Majlis ul-Shura of the United Mujahideen Forces of Caucasus (all designated Islamic terrorist groups  by national governments, former governments and inter-governmental organizations)?

We didn't link Islam to terrorism. The Quran does.

Surely the vilest of animals in Allah's sight are those who disbelieve — 8:55

Soon shall We cast terror into the hearts of the Unbelievers — 3:151

Lo! Those who disbelieve Our revelations, We shall expose them to the
Fire. As often as their skins are consumed, We shall exchange them for
fresh skins that they may taste the torment. Lo! Allah is ever Mighty,
Wise. – 4:56

Then, when the sacred months have passed, slay the idolaters wherever ye
find them, and take them (captive), and besiege them, and prepare for
them each ambush. But if they repent and establish worship and pay the
poor-due, then leave their way free. Lo! Allah is Forgiving, Merciful.
— 9:5

Lo! those who disbelieve, among the People of the Scripture and the
idolaters, will abide in fire of hell. They are the worst of created
beings.– 98:6

Against them make ready your strength to the utmost of your power,
including steeds of war, to strike terror into the enemies of Allah and
your enemies — 8:60

Muhammad is the apostle of Allah. Those who follow him are merciful to
one another, but ruthless to the unbelievers. — 48:29

Righteous women are therefore obedient, guarding the secret for God's
guarding. And those you fear may be rebellious admonish; banish them to
their couches, and beat them. — 4:34

When you meet the unbelievers, smite their necks, then, when you have
made wide slaughter among them, tie fast the bonds; then set them free,
either by grace or ransom, till the war lays down its loads. — 47:4

Lo! those who disbelieve, among the People of the Scripture and the
idolaters, will abide in fire of hell. They are the worst of created
beings. — 98:6 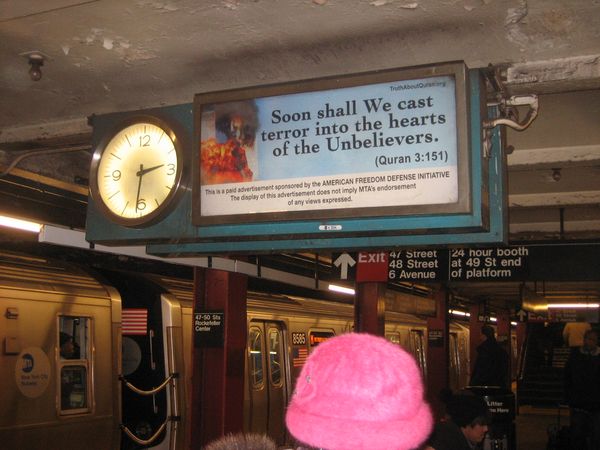 Hundreds of potentially inflammatory advertisements linking Islam to
terrorism have gone up in the subway — the biggest series of its kind to
date.

The ads depict an image of the Twin Towers in flames with a quote,
attributed to the Koran, “Soon shall we cast terror into the hearts of
the unbelievers.”

The pro-Israel American Freedom Defense Initiative paid $77,000 for the
message to be placed on 240 clocks throughout the subway system.

The MTA last year rejected a similarly provocative advertisement from
the group, citing an authority guideline against content demeaning to
any particular religious or cultural group.

But the MTA backed down after a federal court ruled the guidelines violated the Constitution’s guarantee of free speech.

That ad campaign featured billboards in just 10 stations. Many of them
were vandalized, authorities previously said. The Defense Initiative’s
tactics have been criticized by Islamic and nondenominational
organizations, including the Interfaith Center of New York.

"They may be legal but they're not moral,” said the Rev. Chloe Breyer
of the Interfaith Center. “Demonizing the religions of others does not
show New Yorkers at our best.”