This ad is set to be displayed in subway stations on January 7.

The American Freedom Defense Initiative will release new ads on
between the hanging clocks on subway platforms, the NY Times reported.

Last September, the group launched an ad campaign with the word “savage”
referring to Muslim opponents of Israel.  Many of those ads were
vandalized.

ADFI executive director Pamela Geller says the new ads will be out on January 7.

The new ad (below) features the burning Twin Towers and a quote credited
to the Quran: “Soon shall We cast terror into the hearts of the
Unbelievers.”

AFDI chose to advertise up by the clocks this time to avoid vandalism and as a metaphor, Geller told the Times.

“The clock is ticking, from a civilizational point of view,” Geller said. 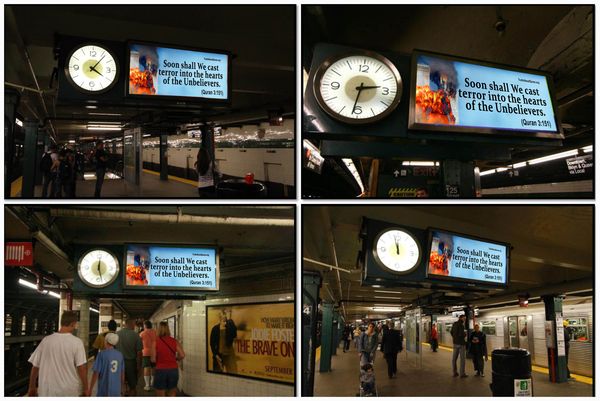