The NY Post has a pretty good piece up on our new Islamic apartheid ads countering the Muslim blood libel currently running on NYC Metro train platforms. We are a pro-freedom group, a pro-America group — so the description of our organization is not entirely accurate.  I am glad the ads are getting this kind of exposure — sunlight is the best disinfectant. People remain painfully unaware of the grotesque human rights abuses under Islamic law. Not for much longer. We will take this campaign nationwide as well. Contribute here. 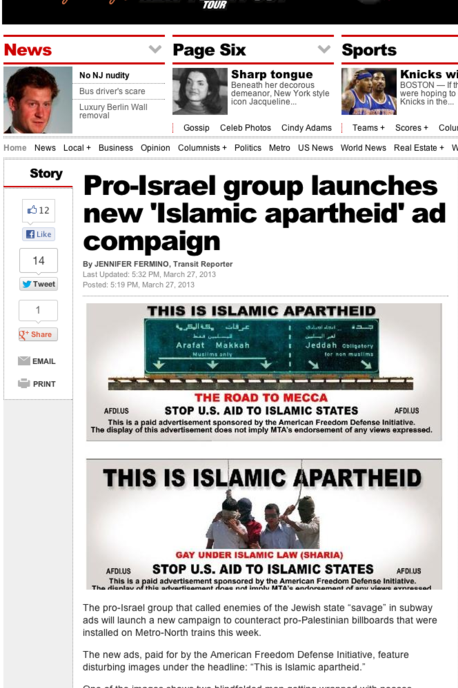 The pro-Israel group that called enemies of the Jewish state
“savage” in subway ads will launch a new campaign to counteract
pro-Palestinian billboards that were installed on Metro-North trains
this week.

The new ads, paid for by the American Freedom Defense
Initiative, feature disturbing images under the headline: “This is
Islamic apartheid.”

One of the images shows two blindfolded men getting wrapped with nooses.

Below the image, it reads, “Gay under Islamic law (Sharia).”

The picture is from Iran, said Pamela Geller, head of the AFDI.

Another picture shows a woman dressed in a white burqa getting
whipped above the words: “Under Islamic law rape victims are tortured or
killed unless they agree to marry their rapist.”

Geller said that picture is from Indonesia.

She submitted the ads to the MTA yesterday.

It’s unclear when they will go up; her ads have been approved before.

The
reference to apartheid is a direct rebuttal of the American Muslims for
Palestine ad, which went up on Monday — the first day of Passover — in
25 MetroNorth stations.

Geller requested her ads be hung in the same stations, which include Fordham and 125th Street.

A spokesman for the Muslim group said the ads were about reclaiming their heritage.

She also said it was a coincidence that they went up on Passover.

“A
lie will go round the world while truth is pulling its boots on” she
said in an email, paraphrasing the famous Winston Churchill quote.

All issue-based ads on MTA property feature a disclaimer that says the viewpoints expressed are not the agency’s.