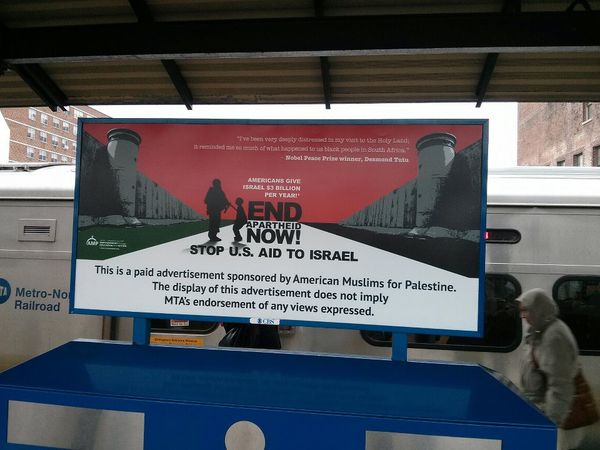 The Myth of Israeli Apartheid

We submitted the following ads (scroll) responding to the repulsive,
anti-Semitic American Muslims for Palestine ads (above) that were
announced yesterday. Our ads will focus on the real apartheid, Islamic
apartheid: the institutionalized oppression of women, gays and
non-Muslims under Islamic law (Sharia). This is the fourth repulsive anti-Semitic campaign that Muslim Jew-haters are running
in the New York City transit system. It is important to point out that
it is these campaigns that were the impetus for the AFDI pro-Israel and
#MyJihad campaigns. I can assure you that this latest Goebbels-style
demonization of the Jews will not go unanswered. We are working right now to get ads responding to these ready for
submission.

Our ads will focus on the real apartheid, Islamic apartheid: the
institutionalized oppression of women, gays and non-Muslims under
Islamic law (Sharia).

Myths and facts0 (here). Contribute to this campaign here or via paypal. Send your donation to americanfreedomdefense@aol.com (it's a 501C3).