I am honored to have been asked by Anders Gravers and Stephen Gash to assume leadership of the Stop the Islamization of America movement. Joining me is my partner in crime, Robert Spencer 🙂 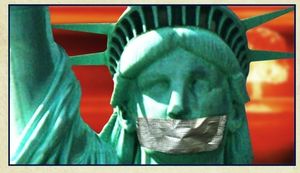 We are very excited to work with our "brothers" in Europe in concert with FDI (Freedom Defense Initiative,) Jihadwatch and of course, Atlas. We are in the planning stages but look forward to actions, legislation, protests, defense and offense in this war, primarily in the information battlespace. We are in this to win. Be a part of us. If you haven't joined our group at facebook, go here.

Stop Islamisation Of Europe (SIOE) is an alliance of people across Europe with the single aim of preventing Islam becoming a dominant political force in Europe.
It originated with the joining of Stop Islamificering Af Danmark (SIAD), a political party dedicated to stopping the Islamisation in Denmark, with a loose association of people in England, whose rallying cry is “No Sharia Here”, who want to maintain English law and want to stop the creeping growth of sharia law in England.
SIOE is growing in Europe with the amalgamation of similarly minded groups.

It has spawned like groups across the world (Stop the Islamisation of England, Australia, et al)

Anders Gravers, Danish leader of the Stop the Islamisation of Europe movement – and now a poltical party made this announcement:

We have now formed a new board for SIOA. The new board of SIOA is: Pamela Geller, Robert Spencer, Stephen Gash and Anders Gravers.
The leaders of SIOA are Pamela Geller and Robert Spencer.
Stephen and I have discussed for quite some time the fact that SIOA has not developed in the direction we wanted. There are groups enough who just write about the danger of Islam, but very few groups that actually do something to try to stop the Islamisation of the Western civilization.
SIOA was meant to be a group that should take action, staging demonstrations, happenings and events against the Islamisation of the U.S.
The way Stephen and I see it, we need to make SIOA more active. And in order to do that, we have now — after working for a long time to persuade them to take this on — gotten a yes from both Pamela Geller and Robert Spencer to become the leaders of SIOA.
We think they are the right people to bring SIOA to the forefront in the fight against the Islamisation of the U.S.

PROTEST AT 9/11 MOSQUE FUNDRAISING DINNER Members of the Virginia Anti-Shariah Task Force (VAST), ACT for America and the Center for Security Policy will protest appearances by Congressmen Gerry Connolly (D-Virginia) and James Moran (D-Virginia) and former Gov. Tim Kaine at a fundraising dinner for the controversial mosque Dar Al Hijrah.

The Fort Hood jihadi Major Hasan, the sole suspect in the jihad massacre of 13 fellow US soldiers in Texas, worshiped at the controversial Dar al-Hijrah mosque in Falls Church, Virginia. That mosque was led by the devout Muslim imam, Anwar al-Awlaki, who is said to have been a "spiritual adviser" to three of the hijackers who attacked America on Sept 11, 2001.

The preacher at the Dar al-Hirah mosque was also in regular contact with the Christmas balls bomber, who tried to blow up a passenger jet on Christmas day. Umar Farouk Abdulmutallab sat on top of the fuel tank (seat 19A) and tried to detonate a bomb hooked up to his tiny genitalia.