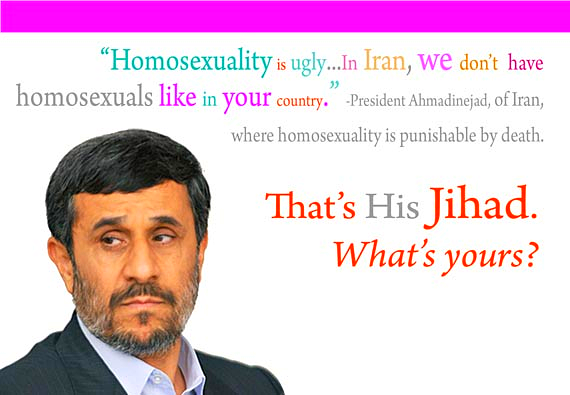 In light of the irrational response by city officials to our jihad campaign in uber-left San Francisco, we have submitted another series of ads to that city. Considering what a mecca San Francisco is to the gay community, it is beyond belief that the city would be carrying water for the most brutal and homophobic ideology on the face of the earth.

We  submitted these ads late yesterday featuring the President of a Muslim country, the spiritual leader of the Muslim Brotherhood and a radio talk show host on Muslim radio in the UK, calling for the murder of homosexuals.

And they're not "extremists." The Qur'an says: "And
[We had sent] Lot when he said to his people, 'Do you
commit such immorality as no one has preceded you with from
among the worlds? Indeed, you approach men with desire, instead of women. Rather, you are a transgressing people.'…And We rained upon them a rain [of stones]. Then see how was the end of the criminals." (7:80-84) Muslim clerics often use this as a justification for stoning gays. And Muhammad set the death penalty for homosexuality when he said: "The Messenger of Allah (peace and blessings of Allah be upon him)
said, 'Whoever you find doing the action of the
people of Loot, execute the one who does it and the one to whom it is done.'" (Sunan Abu Dawud 4462)

Check out Theresa Sparks of the San Francisco Human Rights Commission at minute 1:41. Sparks would be sliced and diced so fast under the sharia. Carry that water, Terry.

Our new ads carry this text:

“If there are two such persons among you, that do this evil, the
shameful act, what do you have to do? Torture them; punish them; beat
them and give them mental torture." — Sister Ruby Ramadan on Radio Asian Fever, a Muslim radio station in Britain

"Homosexuality
is ugly" "In Iran, we don’t have homosexuals like in your country"
President Ahmadinejad, Iran where homosexuality is a crime punishable by
death

Huge shoutout to Big Fur Hat for this genius in ad creation. 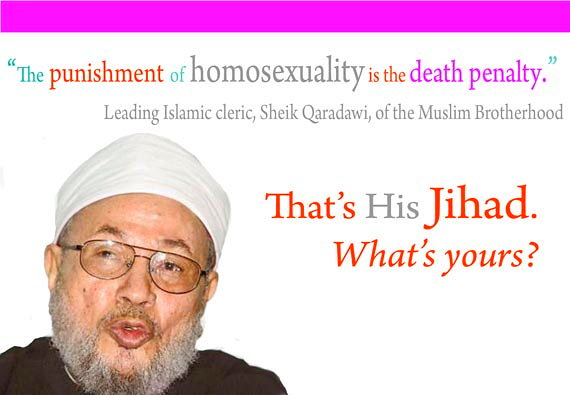 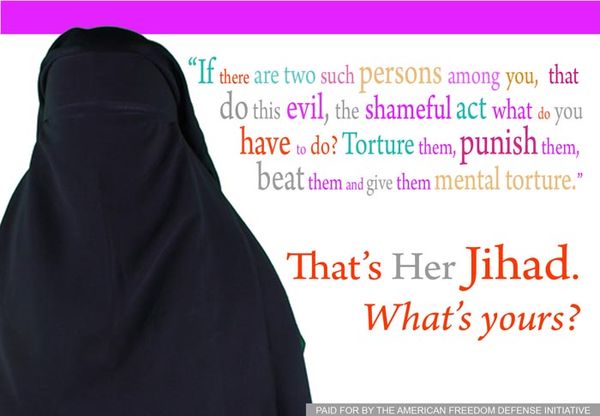