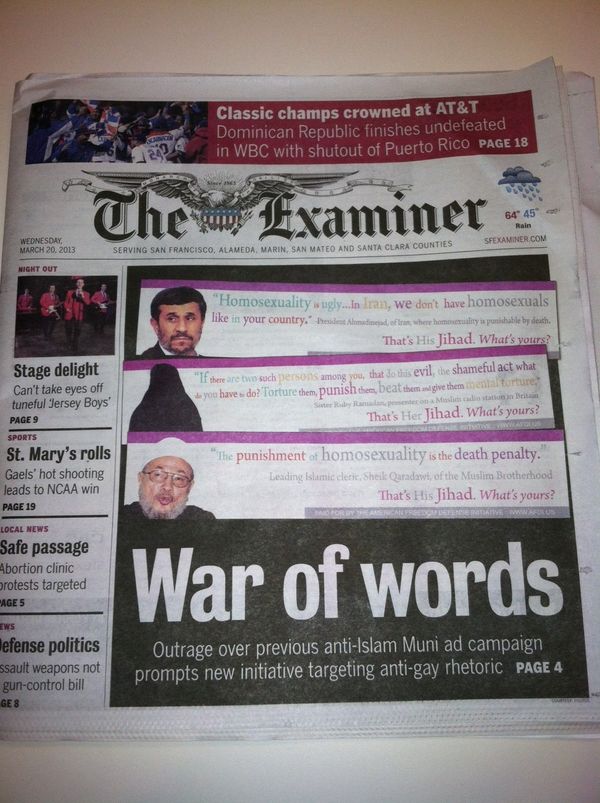 Much thanks to Paul for sending it in.

Read the whole thing here:  Head
of SF Human Rights Commission Transgender Theresa Sparks on AFDI Gay
ads, it's "easier to get insurance for sexual transition procedures in
Iran than in America"

The
disconnect is breathtaking. The head of the San Francisco Human Rights
Commission, transgender Theresa Sparks, continues to support the sharia
and denounce our ad campaign designed to raise awareness of the
plight of gays under Islamic law. Our new campaign uses the actual
quotes of President Ahmadinejad, global Muslim spiritual leader Qaradawi
and popular radio host in the UK, Sister Ruby Ramadan (political,
religious and cultural).

Sparks, something of the spark for our new AFDI campaign, went so far to say, "it’s actually easier to get insurance for sexual transition procedures in Iran than in America." Hmmm, is that why the President of Iran insists there are no homosexuals in that country?

Such delusion is without peer. Sparks ought to spend a little time in
that hellhole and see if she escapes with her life. For someone so
clear about being true to herself and being who she is, she is either
blind or cowardly. The persecution, subjugation and oppression of gays
is religious — it's the sharia. Not every Muslim subscribes to it, of
course. But the ideology behind it is very much the problem. Sparks
claims it's cultural — what culture is that? Islamic culture. Sparks is
sharpening the blade of her executioners.

Sparks is intellectually dishonest when she claims that our ads
"suggest that all Muslims hate gays." That's a red herring. The ads
suggest no such thing. The oppression and persecution of gays is
epidemic in the Muslim world and Sparks is sanitizing this horror. And
many in the gay community suffer here in the United States.

Where was Theresa Sparks when a Muslim gang was targeting gays in San Francisco in a series of attacks, shooting them in the face with a BB gun and video-taping the attacks? A Muslim gang targeted nearly a dozen victims one evening, recording the shootings on a video camera confiscated by police along with a “rifle-style” BB gun .There was a concerted effort within the San
Francisco police department to bury this story, and it is only because one
officer leaked the report to the media that anything was ever
reported. Where was Sparks then?

The Muslims chose their victims "because they
appeared to be gay."

How many attacks do we not hear about so as not to offend the
sensibilities of the Muslim community? These attacks are increasing
across the country with large Muslim communities, i.e. New York, Minnesota, Maine, not to mention the gay-bashing in sharia zones in the UK, France and across Europe.  Shame on Theresa Sparks.

More controversial anti-Islamic advertisements are scheduled to be
coming to Muni buses, with the new messages quoting anti-gay rhetoric
from Islamic leaders. The head of the initiative said local gay leaders’
criticism of previous ads led to the latest effort.

A number of city officials, religious figures and community activists
held a news conference last week to condemn a set of ads paid for by
the American Freedom Defense Initiative that expressed views widely seen
as anti-Islamic.

The messages, containing phrases attributed to notorious figures such
as Osama bin Laden, were the second set of Muni ads paid for by the
organization.

In both instances, Muni dedicated revenue from the campaigns to the
San Francisco Human Rights Commission. The $3,000 in revenue for the
next ads also likely will be donated.

With Muni unable to refuse the ads because of First Amendment
conflicts, initiative leader Pamela Geller has created another campaign
to run on six Muni buses starting in early April. The new ads quote
Islamic leaders making inflammatory comments, this time about
homosexuality.

One message quotes Yusuf al-Qaradawi of the Muslim Brotherhood
saying, “The punishment of homosexuality is the death penalty.” Each ad
ends with the same line as the previous campaign: “That’s His Jihad.
What’s Yours?”

Geller said she decided to embark on the campaign after hearing gay leaders in San Francisco denounce her previous ads.

“The ads will increase awareness about the subjugation and oppression
of gays under Shariah law,” said Geller. “The gay community should be
standing with me, not against me.”

Theresa Sparks, head of the Human Rights Commission, said the ad
campaigns are another example of Geller categorizing an entire religion
as intolerant.

“She is posting these ads to suggest that all Muslims hate gays,”
Sparks said. “Some cultures do discriminate, and that’s wrong. It all
depends who you’re talking to. But she’s trying to generalize and cast
this wide net around a diverse group of people.”

Sparks, who is transgender, said it’s actually easier to get insurance for sexual transition procedures in Iran than in America.

In a post Tuesday on Geller’s blog, Atlas Shrugs, she dedicated the latest campaign to Sparks.

Geller has run similar campaigns in other cities, and the New York
City Metropolitan Transportation Authority attempted to bar the ads from
its vehicles. However, a federal judge ruled in July that such a move
would be unconstitutional.

Last week, Muni announced that it would run an ad campaign to counter
the American Freedom Defense Initiative’s messages. Those ads, located
inside more than 100 buses, espouse messages of peace and acceptance.

The Southern Poverty Law Center and the Anti-Defamation League have
both deemed the American Freedom Defense Initiative a hate group.

UPDATE: Big Fur Hat has "the hole story" here on why transgender ops are so popular in Iran.

Iranian-born filmmaker, Tanaz Eshaghian, who brought attention to
Iran’s transgender community in her award-winning 2008 documentary film,
“Be Like Others,” illustrates the logic behind the law. In one scene of the film,
a Muslim cleric explains how Islam supports sex-change surgery. “An
action is allowed unless it states specifically in the Quran that an act
is a sin. Why is adultery one of the seven deadly sins? Because it
specifically says so in the Quran. Because it does not specifically
state that sex change is a sin, therefore, we cannot call it a sin.”

Yet while the freedom to change sex might come as a relief to some,
Eshaghian also draws attention to the pressure felt by gay men and women
in Iran to have sexual reassignment surgeries as a means of
legitimizing their sexual orientation. As gay individuals, they are
committing a crime. As transsexuals, they can exist under Iranian law.

Ali Askar, a male-to-female who underwent surgery, told the BBC, “If I didn’t have to operate, I wouldn’t do it. I wouldn’t touch God’s work.”

Gender theorist Afsaneh Najmabadi
adds: “For legal and medical authorities, sex change surgeries are
explicitly framed as the cure for a diseased abnormality, and on
occasion they are proposed as a religioegally sanctioned option for
heteronormalizing people with same-sex desires or practices.”