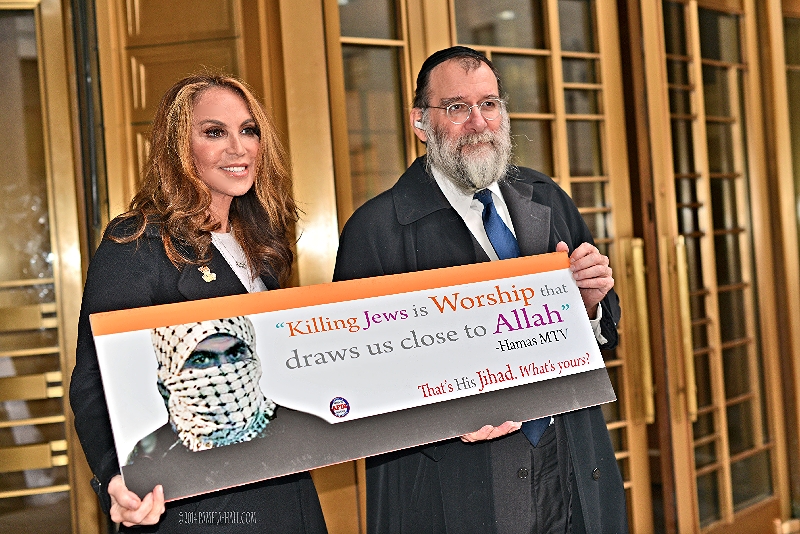 AFDI is in the news again this week. The Pennsylvania Transit Authority called a press conference Thursday and announced THEY WILL NOT APPEAL OUR WIN.

Our ads of truth will hit the Philadelphia streets this week.

PHILLY: Last week, my human rights organization, the American Freedom Defense Initiative (AFDI), scored another major free speech victory in Philadelphia. The court ruled that our ads highlighting Islamic Jew-hatred and the Nazi-Islamic alliance, which had been previously denied, could not be prohibited. The judge ruled they had to run.

Philadelphia transit is going to make an end run around the frist amendment. SEPTA announced they would stop taking political/issue related ads. We must fight that. Help us fight. Donate here.

Controversial ads coming to SEPTA buses
ABC News  – ‎Mar 26, 2015‎
Attorneys for the group that purchased the ads – the American Freedom Defense Initiative, or AFDI – called SEPTA's decision "prudent." They argue this was clear cut case of free speech. SEPTA responded to the federal court's decision by changing its policy ..

Controversial Ads To Appear On Some SEPTA Buses
CBS Local, ‎Mar 26, 2015‎
Thursday, the transit authority said it would not appeal the federal court ruling that AFDI has a First Amendment right to run the bus ads. SEPTA general counsel says there will be no appeal citing legal costs and the authority's new revised advertising policy.
SEPTA agrees to accept 'Jew hatred' ads
Philly.com - ‎Mar 26, 2015‎
The ad was produced by the American Freedom Defense Initiative (AFDI), a New Hampshire-based nonprofit organization, which argued in legal filings that the ad was germane and timely "in light of the fact that many Jews (and Christians) are being …

AFDI Wins Important Free Speech Victory, But Opponents End Run Around the …
Breitbart News
Last week, my human rights organization, the American Freedom Defense Initiative (AFDI), scored another major victory for truth and freedom in Philadelphia. The court ruled that our ads highlighting Islamic Jew-hatred and the Nazi-Islamic alliance, which …

But there's more —
NYC: We were back in court on Tuesday fighting the autocrats in NYC government:

Back in United States Court in New York City

Last Tuesday, we argued before the U.S. District Court for the Southern District of New York on our motion for a preliminary injunction, asking the court to enter an order requiring New York City’s Metropolitan Transportation Authority (MTA) to run our AFDI anti-Hamas, anti-jihad ad on MTA buses.

I was there, and let me tell you, the foes of free speech made some telling and fascinating admissions. (Read the rest here…..)

Our ads went up in Washington DC – LOOK!

AMP, the sponsor of this Jew-hating ad, evokes the ugly anti-Semitic stereotypes in which Jew-haters have long trafficked. This is part of a systematic campaign by many different Islamic and leftist groups to dehumanize and demonize the Jewish state. This vicious propaganda is running unchallenged even by pro-Israel groups that ought to be at the forefront of this battle.

To counter the AMP ads, we’re reviving our renowned ads reading, “In any war between the civilized man and the savage, support the civilized man,” with the new tagline, “Increase aid to Israel. Stop funding jihad.”

We’re also rolling out a new ad reading: “‘Oh Allah, vanquish the Jews and their supporters. Oh Allah, vanquish the Americans and their supporters. Oh Allah, count their numbers, and kill them all, down to the very last one.’ – Palestinian Legislative Council Speaker Sheikh Ahmad Bahr. Stop the disrespect – End US Aid to the Palestinian Authority and Gaza.”

And another: “‘The Palestinian people does not exist. The creation of a Palestinian state is only a means for continuing our struggle against the state of Israel.’ – PLO executive committee member Zahir Muhsein. Stop the disrespect – End US Aid to the Palestinian Authority and Gaza.”

These ads will both roll out in every city where the AMP ad runs.

The AMP’s agenda is frankly insidious. The organization is run by Dr. Hatem Bazian, a University of California at Berkeley professor who equated the Boston jihad bombings with “Islamophobia.”

Donate to our work here.

We go on the offensive and succeed. No war was ever won on the defense.